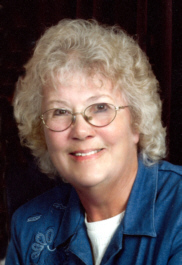 Johanna â€œJobyâ€ Petry, 79, passed away at 8:45 a.m. on Friday, May 19, 2017 at Millerâ€™s Merry Manor in Plymouth.
Joby was born on February 20, 1938 in Kendallville, Indiana to Tallock A. and Mary Lois (Bryan) Stangland. She graduated from Wolf Lake High School in 1956, and from Manchester College in 1960.
On April 21, 1962, Joby married Glen Dale Petry in Wolf Lake, Indiana. The couple lived in Plymouth for two years before making the Walkerton area their home for over 50 years.
She taught business classes at Grovertown High School from 1960-1963, and then worked for Price Nursery until retirement in 2008.
Joby was a member of the Plymouth Church of the Brethren, teaching youth classes for 18 years and serving as board chairman for four years. She was involved in the Outreach Committee and involved in the 4-H with dog obedience.
She enjoyed gardening, knitting and cooking. But most of all, Joby treasured times with her family, grandchildren, and great-grandchildren.
Joby is survived by her husband Glen and their children: Cynthia P. (Mike) Aiello of Elkhart, Janet S. (John) Shoue of Roann, IN, Troy A. Petry of Columbus, OH, and Brenda M. (James Towns) Petry of MN; 11 grandchildren: 5 great-grandchildren and a niece, Hayley (Daniel) Spain of CA and their son Tallock.
She was preceded in death by her parents, brothers, Bill and Thomas Stangland, and son-in-law, Brad Gilbert.
Visitation will be from 4-7 p.m. EST on Monday, May 22, 2017 in the Johnson-Danielson Funeral Home, 1100 N. Michigan Street, Indiana.
Funeral services will be held at 11 a.m. EST on Tuesday, May 23, 2017 at the Plymouth Church of the Brethren 1130 N. Michigan Street, Plymouth with Pastor Tom Anders officiating. Visitation will resume one hour prior to the services in the church.
Burial will be in the Morris Park Cemetery on U.S. 6 west of LaPaz.
Memorial contributions can be made to the Plymouth Church of the Brethren- Youth Programs.