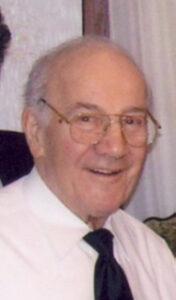 John A. Faber, 89 went home to be with the Lord whom he had served faithfully all his life. John was born in Charlevoix, Michigan on May 17, 1922 to John Peter Faber of Friesland, Holland and Floraine Sodell of Belfort, Alsace-Lorraine.
John graduated from Fanger High School in Chicago, Illinois and went on to work for the Navy Civil Service in Hawaii. He returned to Chicago to join the US Navy and was assigned to the Seabees for the duration of WWII. After the war he located in Marshall County where he met and married Carol Neidigh, 8/8/48.
He specialized in jet fuel systems working for and setting up different companies from coast to coast.
John is survived by his wife Carol, sons: Douglas J. Faber of Atlanta, GA, Dan A. Faber and his wife Dale C. Faber of Montgomery, AL. He was preceded in death by his youngest son David R. Faber on October 28, 2008. Also surviving are granddaughters; Kristen E. Faber, Carol Ann Faber both of Baltimore, MD, and M. Eloise Faber of Auburn, AL. John’s brother Peter H. Faber preceded him in death. His sister-in-law Ruth Faber of Griffith, IN and two nieces: Barbara (David) Werblo of Hebron, IN and Joan (Daniel) DeBlock of Dyer, IN also survive.
Visitation will be held in the Johnson-Danielson Funeral Home, Plymouth on Friday from 10 -11 a.m. followed by a service at 11 a.m. led by his son the Rev. Dan A. Faber and the Rev. Kerry O’Brien.
Burial will follow in the New Oakhill Cemetery, Plymouth with military honors provided by members of the Plymouth American Legion Post 27, Veterans of Foreign Wars – Marshall County Post 1162 and the D.A.V.
The TV program Worship For Shut-Ins on WHME Sunday mornings at 11:00 am has been a great blessing to our family and we want to honor John for his commitment and dedication to Christ by supporting this ministry in lieu of flowers.
Worship For Shut-Ins, #5 Martin Luther Drive, Fort Wayne, IN 46825-4996