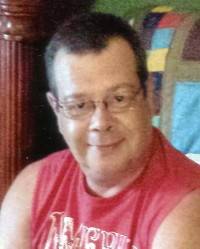 John Richard Bellville Jr. 59 of Plymouth and formerly of Adena, Ohio passed away on Thursday November 8, 2018 at his home. John was born on May 12, 1959 in Wheeling, West Virginia to John Sr. and Patricia Ann (Thalmann) Belleville.
He graduated from Martins Ferry High School, in West Virginia and entered into the U.S. Navy after graduation.
He managed and served as locksmith of the Kennedy Hardware Store in Wheeling, West Virginia for many years.
He loved dirt track racing and was an avid Ohio State football fan and he loved his pet dogs.
He was of the Catholic faith and has lived in Plymouth for the last three years and was formerly of Adena, Ohio.
Survivors include his mother, Patricia Ann Bellville of Wheeling, West Virginia, two sisters; Debbie Kaiser of Martins Ferry, West Virginia and Linda Charron of Sophia, North Carolina: two brothers Chuck Bellville of Martins Ferry, West Virginia and Mike Bellville of Suanee, Georgia. Also surviving are his fiancÃ© Jennifer Fox of Plymouth, step sons; Shannon Thompson, and Dale Jackson and three step grandchildren, two nieces and two nephews.
He was preceded in death by his father John Bellville Sr. in 1995.
Family memorial services will be held in Ohio at a later date.
Memorials may be directed to the Marshall County Humane Society P.O. Box 22, Plymouth, Indiana 46563.