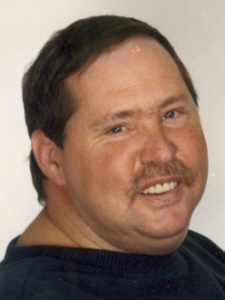 John E. Bottorff, 51, of Plymouth died of natural causes in St. Joseph Regional Medical Center, Plymouth, on Friday, June 8, 2012, at 2:58 a.m.
John was born in Knox, IN. on August 1, 1960. He was the son of Don L. and Anita L. Sellers Bottorff.
On May 14, 1994, in their home in Plymouth, John and Connie A. Balsley were married. Connie survives her husband’s death.
John was a forklift driver for Lear for over 25 years.
He enjoyed stockcar racing and listening to music.
John is survived by his wife, his father, a daughter and two sons. His daughter is Heather. She her husband, James Howard and their children Emily, Hayley and Landon, live in Plymouth. A son Travis Bottorff and his children, Mackenzie and Kaitlyn also live in Plymouth. Robert Bottorff, a son, lives at home in Plymouth as well.
Also surviving are two brothers: Phil L. and Cheri Bottorff, Knox and Tim and Lisa Bottorff of Pryor, OK. An uncle, Larry Sellers of Culver, survives as well.
John was preceded in death by his mother.
Visitation will be held from 4 to 8 p.m. on Monday, June 11, 2012, in the Johnson-Danielson Funeral Home, 1100 N. Michigan St., Plymouth.
Funeral services for John will be held at 1:00 p.m. on Tuesday, June 12, 2012, in the funeral home with John Miller officiating. Interment will be in the New Oakhill Cemetery, Plymouth.
Memorial gifts in John’s memory may be sent to the family through Johnson-Danielson Funeral home.