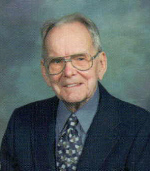 John Cletus White, 90, a compassionate, thoughtful and well-respected man, died of natural causes at 2:10 a.m. on Saturday, October 13, 2001. John, who formerly lived at 16290 Pretty Lake Road, Plymouth, died in Pilgrim Manor, Plymouth. Born on January 23, 1911, in Marshall County, John was the son of John A. and Inez Dreitzler White. He graduated from Argos High School with the class of 1929. On October 20, 1935, in the First Presbyterian Church, Plymouth, John and Savannah Barkley were married. Savannah preceded her husband in death on June 18, 1996. Both the Whites were very active in their church, the First Presbyterian. They served in many capacities. He was a member of the Presbyterian Session and active in church affairs for over half-a-century. John had a long and illustrious career in the dairy products business. He was associated with Schlosser Brothers, Plymouth, for 31 years as assistant General Manager, Secretary and Vice-president of the company. For 22 years he was employed by Hawthorn Mellody, successor of Schlosser Brothers, as General Manager, President of the Indiana-Michigan Division and as Corporate Vice-president. He retired in 1980. In 1969, he served as President of the Indiana State Dairy Products Association and on the Dairy Advisory Board of the State of Indiana’s Board of Health. That same year, John went to Brazil as a member of a governmental committee commissioned to assist South American countries to develop their dairy industry. He also had served 24 years on the Board of Directors of the Bowen Center and was elected president of the board twice. John White also served seven years on the Plymouth Community School Board and held the office of president for two terms. He was Past President of the Kiwanis Club, a Past Master of the Argos Masonic Lodge and Secretary of the Plymouth Chamber of Commerce. A veteran of World War II, John served in the United States Navy as a communications expert in the Pacific Theater in the spring of 1944. John is survived by two daughters and one son: Judy B Albert of Bettendorf, Iowa, Beverley J. and Richard Turner of Crawfordsville, Ind., and John B. and Nola White of Lima, Ohio. In addition, he is survived by seven grandchildren: John H. and Fawn Turner, Eau Claire, Wis., David W. and Sally Turner, Crawfordsville, Robert E. and Beth Turner of Waynetown, Ind., Marcia L. and Brian Kendall of Indianapolis, Ind., Savannah C. and Ron Boege of Tallahassee, Fla., John B. and Cindy White of Cedarville, Ohio and Stephen D. and Nicole White of Columbus, Ohio. Other survivors include 14 great-grandchildren. In addition to his wife, John was preceded in death by his parents and a granddaughter, Patricia Ann Turner. Two brothers, Samuel White, who died in Marshall County in 1938, and Paul White, who died in Claire, Mich. in 1976, and one sister, Bernita White Goodyear, who died in Denver, Colo., preceded him in death also. Visitation with the family will be on Tuesday, October 16, 2001, in the First Presbyterian Church, 401 N. Walnut Street, Plymouth. Funeral services will be conducted at 11 a.m., following visitation, by two of John’s grandsons: John B. White and Pastor Robert E. Turner. Preferred memorial contributions may be made to the First Presbyterian Church, Plymouth, to the Marshall County Hospice or to a charity of the donor’s choice.