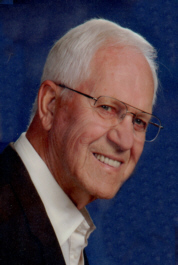 John E. Myers, 88, of Suter Road passed away Saturday night at 11:30 p.m. in his home on March 31, 2017.
John was born in Hammond, Indiana on November 16, 1928 to John C. and Eleanor A. (Chambers) Myers. He graduated from LaPaz High School with the class of 1947, where he served as president his senior year.
He married Mary Maxine Marsh on May 12, 1951 in Plymouth.
John served our country in the U.S. Army while stationed in Germany during the Korean Conflict. He was Honorably Discharged in 1952.
He worked for Bendix Corp. for 30 years as a timekeeper before his retirement in 1982.
John grew up with parents who were deaf, and he learned sign language. With this gift, and as a member of Calvary Lutheran Church in Plymouth, he was a member of the Braille Workers. He served on the Plymouth School Building Corporation with Francis Johnson in 1968 during the building of Washington Grade School. He was a member of the American Legion Post #27 in Plymouth, past president of the churchâ€™s softball league and past president of the church congregation. He was a major supporter of the Big Red Sports Booster, and loved talking and helping others.
John is survived by his loving wife, Maxine of Plymouth and their two sons: Douglass A. (Lily) Myers of Plymouth and Todd A. (Toni) Myers of Granger; 3 grandchildren: Sabrina (Marcus) Hickey of Franklin, IN and their children: Ian, Alex and Aaron, Wesley (Kem) Myers of Plymouth and their children: Khloe, Cadien, Carter and Kylah, and Tiffany (Ola) Sindre of Norway and their children: Teddy and Freddy.
He was preceded in death by his parents.
Visitation will be held on Wednesday April 5, 2017 from 4-7 p.m. in the Johnson-Danielson Funeral Home, 1100 N. Michigan Street, Plymouth.
Services will be held at 11 a.m. on Thursday, April 6, 2017 in Calvary Lutheran Church, 1314 N. Michigan Street, Plymouth, officiated by Pastor Eric Ahlemeyer. Visitation will resume one hour prior.
Burial will be in the Oak Hill Cemetery with Military Honors provided by members of the American Legion Post 27, Veterans of Foreign War- Marshall County Post 1162 and Disabled American Veteran Chapter 42.
Memorial contributions can be made to the Calvary Lutheran Church, 1314 N. Michigan Street, Plymouth, IN 46563.