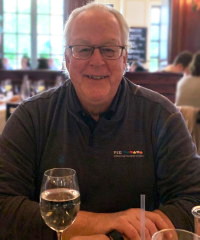 It is with great sadness that the family of John Freyman Glaub, of Plymouth, Indiana, announces his sudden passing, on Thursday January 30, 2020, at the age of 65 years. John was born February 22, 1954, in Plymouth, Indiana, to Charles Orlando and Helen Irene (Klein) Glaub. John attended Plymouth High School and Indiana University. An adventurer from a young age, he traveled coast to coast on his bicycle with the Wandering Wheels in 1971. The next year, at the age of 18, John was chosen to be a junior delegate at the 1972 Indiana Democratic Convention, making him one of the youngest to ever hold that position. On January 8, 1977, John married his life-long sweetheart and best friend, Mary Pat (Martindale) Glaub. Together, they raised their five children, Carrie, Patrick, Christopher, Anthony, and Jonathon, and were later blessed with eight grandchildren. Always the idea man, John had many business ventures. He worked with AFLAC for many years, alongside his father, siblings, wife, and children, eventually becoming the State Sales Coordinator. Working with family was so important to John, and this is no surprise as his work life began at G&G, the family grocery store. It is there that he learned what it meant to do your due diligence, and he carried that over into the next generation when, along with his son, Christopher, he formed what would become Professional Insurance Enrollers in 2010. Joined by his children, his business grew, and honoring his legacy, it will continue to grow. John’s many hobbies included travelling the country with his wife, Mary Pat, cheering on the Fighting Irish every fall at Notre Dame, rocking out at 311 concerts with his family, and golfing with his children and grands. He loved to bake and would share his creations with his family, always making sure that samples made their way over to his mother, Helen, and sister, Cathy, next door. Most of all, John loved spending time on Pretty Lake, especially when surrounded by his family. John is survived by his mother, Helen (Klein) Glaub; his wife, Mary Pat (Martindale) Glaub; his children and their families, Carrie Schramm and her sons Elijah and Jonathon, Patrick Glaub, Christopher and Megan Glaub and their children Cannon, June, and Mayor, Anthony and Brittany Glaub and their sons Henry and Charlie, Jonathon and Megan Glaub and their son Arlo; his mother- and father-in-law, Frances and Larry Burden; his siblings, Cathy Glaub, Charles and Heidi Glaub, Andy and Annie Glaub; numerous nieces and nephews; and his amigo, Eduardo Munoz. John was preceded in death by his father, Charles Glaub, and his father-in-law, Frank “Pat” Martindale. The family will receive friends on Monday, February 3rd from 3 p.m. to 7 p.m. in the Johnson-Danielson Funeral Home, 1100 N. Michigan St. Plymouth. A Memorial Mass will take place at 11:00 a.m. Tuesday, February 4th at St. Thomas Episcopal Church 400 N. Center St. Plymouth with Fr. John Schramm officiating.
Inurnment will take place in the columbarium of St. Thomas Church. In lieu of flowers, memorial gifts may be made to St. Thomas Episcopal Church or Marshall County Boys & Girls Club 314 E. Jefferson St., Plymouth, IN 46563.