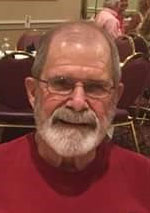 John F. Lampkins Sr., 75, passed away of a sudden illness in his home on Friday morning November 24, 2017.
John was born December 12, 1941 in Hazard, Kentucky to Marion and Frona (Baird) Lampkins. Shortly after his family moved to the Marshall County area. He graduated from Tyner High School with the class of 1959.
He served for our country in the U.S. Navy and was Honorably Discharged on March 27, 1964.
On September 1, 1965, John would marry the former Beverly Fisher in Niles, Michigan. To this union six children were born: Mark, Rod, Pam, Kevin, John Jr. and Mike.
John worked for McCordâ€™s for over 30 years, took a few years off, and then returned to work for Indiana Heat, as a silver solder. Retirement came 10 years later. Beverly and he loved taking motorcycle rides together, pulling their trailer and camping in all the states but Alaska and Hawaii. He was a huge sports fan, a game always being on the TV if they Cubs were not playing.
He is survived by his children: Mark A. (Becky) Anderson of Grovertown, Rod L. (Peggy) Dawson of Culver, Pam S. Schuler of North Webster, Kevin R. Lampkins of Warsaw, John F. (Candy) Lampkins Jr. of Plymouth and Mike J. Lampkins of Plymouth; 17 grandchildren, soon to be 22 great-grandchildren; his sister, Gracie Freed of Plymouth; cousin Bill (Bertha) Cottongame of Hazard, KY, and several cousins.
John was preceded in death by his parents, 6 grandchildren and brother-in-law, Robert Freed.
Private family services will be held with Military Honors provided by members of the American Legion Post 27, Veterans of Foreign War- Marshall County Post 1162 and Disabled American Veteran Chapter 42.
Memorial contributions can be made to Center for Hospice Care, 112 S. Center St. Plymouth, Indiana 46563.