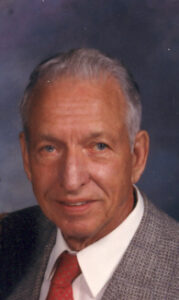 John H. Dettmer, 89, a resident of Maplewood Avenue in Plymouth, passed away at 5:40 a.m. Friday, July 27, 2012 in the Catherine Kasper Life Center, Donaldson following an extended illness.
John was born in Hartington, Nebraska on October 23, 1922, the son of George and Theresa (Frigge) Dettmer. The family moved to Indiana in 1935 after which John and his siblings helped with farming on the grounds of Ancilla Domini.
In 1941, John graduated from Ft. Wayne’s Catholic Central High School and entered the Coast Guard. He served during WWII until his separation in Boston, Massachusetts on September 29th 1945. Sixty years later John returned to Boston with his entire family to celebrate their 60th Wedding Anniversary.
On August 14, 1945 in Plymouth’s St. Michael Church, John took as his bride the former Anna Marie Fox. John and Ann spent many wonderful years together raising their family of four children, experiencing life’s many pleasures especially family events, travel to nearly every state and spending many winters in the Avon Park area of Florida.
John was a dedicated employee with the McCord Corporation in Plymouth, advancing to the Engineering Department and then retiring from the Cummins Engine Company after 42 years.
As an active member of St. Michael Church, he served on its Board of Trustees, as a commentator and usher for many years. He was a past-president of the Holy Name Society and past member of the Plymouth American Legion Post 27.
John loved music and he continued to share that talent with others through the years. For many years he played guitar in a local band known as the Harmonaires and in recent times, he played the harmonica to the delight of many who resided at Catherine Kasper.
John also enjoyed woodworking, gardening and Notre Dame Football.
Surviving is his wife Ann, their four children and families which include 17 great-grandchildren. They are: Linda A. (Mrs. Bob) Lux of Granger and children; Ken Hixenbaugh, Sheri Hedrick, Brian Hixenbaugh and Michael Hixenbaugh. Jeannie M. (Mrs. Mike) Orr of Plymouth and their children; Shannon Morgan, Ryan Orr and Brendan Orr. Dr. John “Jack” (MaryLou) Dettmer of Avon, IN and children; Shawna Coffee and Dr. Matthew Eaton. Dr. David A. (Carol) Dettmer of Auburn, IN and their children; Andrew Dettmer and Allison Dettmer.
John is also survived by a brother, Fr. Alfred Dettmer of Crown Point, IN a sister, Sr. Richilde Dettmer, P.H.J.C., of Donaldson, IN and sisters-in-law, Irene (Mrs. Leonard) Dettmer of Syracuse, New York and Irene (Mrs. Clement) Dettmer of Alsip, IL along with several nieces and nephews.
He was preceded in death by his great grandson; Brock Daniel Hedrick and brothers; Leonard, Clement, Edmund, Ted and Msgr. Aloysius Dettmer
Visitation will be held Sunday evening, July 29, 2012 from 5 – 8 p.m. in the Johnson-Danielson Funeral Home, 1100 N. Michigan St., Plymouth where a Rosary will be recited at 8 p.m. following visitation.
A Mass of Christian Burial will be held at 11 a.m. on Monday, July 30th in the St. Michael Catholic Church, 613 N. Center St., Plymouth. Burial will immediately follow in the New Oakhill Cemetery with military honors provided by members of the Plymouth American Legion Post 27, Veterans of Foreign Wars – Marshall County Post 1162, Disabled American Veterans and the U.S. Army Honor Guard, South Bend.
Preferred are memorial gifts to St. Michael Church, The Center for Hospice Care, 112 S. Center St., Plymouth, IN 46563 or Juvenile Diabetes Research, 325 W. Huron, Chicago, IL 60654