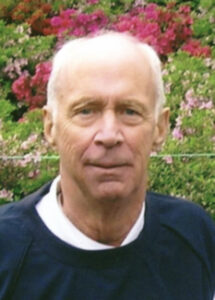 John H. “Jack” Wallace, age 76, passed away peacefully on Thursday, February 13, 2014 at St. Joseph Regional Medical Center, Mishawaka with his loving family by his side.
Jack was born on December 2, 1937 in Pittsburgh, Pennsylvania, to the late John H. and Margaret F. Wallace. He is survived by his wife Judy of 52 years; his daughters Diane L. (Marc) Newman; Jill A. (John) DeSalle; his granddaughters, Holly and Alyson DeSalle.
After graduation from Ashland College in 1961, Jack began his 50 year career as a Sales Representative in the corrugated packaging industry. He enjoyed spending time with his family, golf, watching westerns and the Pittsburgh Steelers.
Friends may unite with Jack’s family to celebrate his life, from 3 to 5 p.m. on Wednesday, February 19, 2014, in the Johnson-Danielson Funeral Home, 1100 N. Michigan St., Plymouth. Memorial services will be held immediately following at 5:00 p.m. in the funeral home. Jack’s brother-in-law, Rev. Phil Lersch of Florida will officiate. Interment will be in New Oakhill Cemetery, Plymouth.
Memorial gifts may be made to the Center for Hospice Care, 112 S. Center St., Plymouth, IN 46563.