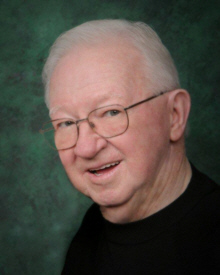 John James Hutchings died peacefully Saturday February 19, 2011 at home in Enid, Oklahoma.
He was born May 1, 1927 in Morris, Illinois to Forrest and Ada (Goss) Hutchings.
John grew up in Plymouth Indiana and graduated from Plymouth High School in 1945.
John worked for the Indiana Motor Bus Company for 24 years as the Charter Coach Manager. He took many trips to Wrigley Field to see his beloved Cubs play. He then worked for Tucker Freight Lines for 12 years as a salesman. John worked 8 years for Hill Truck Sales selling Freightliners. He retired in 1993.
He married Grace A. Long on October 20, 1951 in Plymouth, Indiana. They celebrated their 59th anniversary in 2010. They have three children.
John and Grace lived in South Bend, Indiana for 41 years. In the summer of 2004 they moved to Enid Oklahoma where he helped his daughter and son-in-law in their McDonald’s Business. He was the official paper shredder and made sure that everyone in the organization received a birthday greeting.
John was a 50 year member and past President of the South Bend Lions Club, and was a current member and past President of the Enid Noon Ambucs. He was an avid golfer and had two holes in one during his golfing days. His only rule on the golf course was that you did not lose your temper and you never threw a club. He was a proud blood donor in Indiana and Oklahoma donating many gallons through the years. John was an Eagle Scout and was proud when his Grandson became one as well.
He is survived by wife Grace, daughters Lynn Biddle and husband Steve of Enid, OK, Cris Dycus and Lester Sellers of Bourbon, Indiana and son Jeff Hutchings and Anna Ricci of South Bend, Indiana, six grandchildren and 3 great-grandchildren all of Indiana.
Also surviving are sisters, Elizabeth Smith of Orland Park, Illinois, Phyllis Kelsey, Ada M. Petill, Susan Newman, Helen Beedy and Toni Hutchings all of Plymouth, Indiana, and a brother James Hutchings of Indianapolis Indiana. He was preceded in death by his parents, and sisters, Marjorie VanVactor, Mary Jane Pullian, Ruth Hutchings and brother Robert Hutchings.
Visitation for family and friends will be held on Monday, February 28, 2011 from 5 – 7 p.m. in the Johnson-Danielson Funeral Home, 1100 N. Michigan St. Plymouth. Services will be held at 11 a.m. Tuesday, March 1, 2011 in the Plymouth Church of the Brethren, 1130 N. Michigan St., Plymouth, where friends may call from 10 a.m. until time of services. The Rev. Robbie Keck, pastor of Teegarden First Brethren will officiate.
Memorials may be made to Ronald McDonald House Charities of Michiana, P.O. Box 1274 South Bend, Indiana 46624