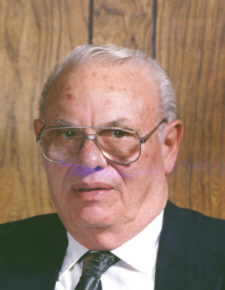 John Lowell Brown, 11942 4A Road, Plymouth, died on Monday, Oct. 15, 2007, at 10:50 p.m. in Broadway Methodist Hospital of Merrillville, Ind., following complications from open heart surgery. He was 83 years old.
Born in Teegarden, Ind., on Jan. 29, 1924, John was the son of John Madison and Lyla Trump Brown.
He graduated from Tyner High School with the class of 1942, and served in the United States Navy during World War II.
John and his wife of almost 63 years, Virginia Goss Brown, were married on January 20, 1945, in Norfolk, Va.
He worked at Studebakers both before and after the war. He was employed there for 15 years before moving on to work at Bendix for the next 15 years.
He then retired and became the maintence man at the Marshall County Building.
He was a member of the Marshall County Civil Defense team for over 30 years.
John also raised and bred national and world champion Palomino quarter horses.
He was a member of the American Quarter Horse Association.
John is survived by his wife, a son and two daughters. His son is Rodney (Sheryl) Brown, Kizer, Ore., and his daughters are Marcia (Robert) Rettinger, Plymouth, Ind., and Joyce (Todd) Kanarr, Waucoma, Iowa.
His grandchildren were John’s pride and joy. They are Rick Brown, Dawn Kinney , Robin Smith, Sabrina and Samantha Kanarr.
Eight great-grandsons and one great-granddaughter survive as well, together with a sister, Marie Trump of Florida.
John was preceded in death by his parents, an infant daughter, Sue Ellen Brown, three brothers and a sister.
Friends are invited to celebrate the life of John Lowell Brown with his family on Thursday, Oct. 18, 2007, from 3 to 8 p.m. in the Johnson-Danielson Funeral Home, 1100 N. Michigan St., Plymouth, Ind.
Funeral services for John will be held at 11 a.m. on Friday, Oct. 19, 2007, in the funeral home. Brother Mark Klingerman, an elder of the Plymouth Congregation of Jehovah’s Witnesses, where John was a member, will officiate.
Burial will be in New Oakhill Cemetery, Plymouth, Ind.
Memorial gifts in memory of John may be made to a charity of the donor’s choice.