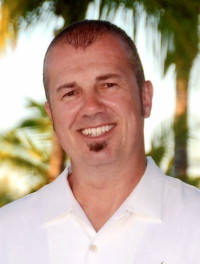 John â€œJPâ€ Michael Pasley, 52, passed away on Tuesday, September 17, 2019.
Born in Plymouth, Indiana on November 20, 1966, John was the son of Janice (Ellinger) and Larry Fisher and John L. and Debbie Pasley. He graduated from Plymouth High School with the class of 1986 and continued on to attend Vincennes College where he received his associateâ€™s degree in criminal justice. When JP loved, he did it with every cell in his body. His love for his three children, Tyler, Cody and Sabrina Pasley, was unbounding, and perhaps, only rivalled by his love for his grandson, Owen Michael Dee Pasley, whom he called â€œmy boy blue.â€ He relished every chance to wear his goofy Papa shirt to show off his pride for his grandson and you had to practically pry the baby out of JPâ€™s arms. JP and Susan Renee (Burgess) Pasley were married in a beautiful beachside ceremony in Key West, FL on October 5, 2011. They fell in love after meeting in the ER, Susan as a nurse and JP while performing his duties in emergency services. For the majority of his career, JP had the privilege of doing what he loved best: serving the people of his community. He was an officer with the Plymouth Police Department for 10 years and a firefighter with the Plymouth Fire Department for 15 years. Most recently JP served as the Supervisor of Security at Allied Universal to ensure the security and safety of the DePuy Plant in Warsaw. At JPâ€™s core, he wanted to help everyone. He would stop to help anyone in need and in his chosen careers he was able to impact so many peopleâ€™s lives in a positive way. After a traumatic incident involving children while on the fire department, JP was compelled to do even more for the kids of Indiana. In 2012, he started the Riley Gear Run to support Riley Childrenâ€™s Hospital. He and several fellow firefighters, EMTs and friends ran the Blueberry Stomp 15K in full fire gear to raise money in addition to putting boots for donation in the community and along the parade route. In total, JPâ€™s Riley Gear Run raised approximately $40,000 â€œFor The Kidsâ€ over 4 years in support of Rileyâ€™s Magic Cart and palliative care programs. This was one of the proudest accomplishments in his life. JP found his passion as well as peace and solitude in the great outdoors where he would spend hours communing with nature, thinking and appreciating Godâ€™s beauty. Although JP was game (pun intended) to fish and hunt turkey and other birds, his true love was deer hunting. It was not just about the hunt for him. He was a fervent believer in protecting and preserving the species and he sought to hunt the deer that had grown, matured and lived a long life. He enjoyed watching the herd, tending his food plot and preparing for the hunting season which starts in 10 days. JP was always considered the life of the party, and he enjoyed hanging out with friends and family. He was a huge Notre Dame Football Fan. He loved to get in a round of golf. He loved to bowl and did on a league for many years. JP loved music, especially disco and movies, even the really bad ones. He was a resident cake baker, and always made the birthday cakes for his family. He attended Crossroads Church in Plymouth, and enjoyed the love and support of his church community.
JP is survived by his wife, Susan Pasley; son, Tyler (Chelsie Vetterly) Pasley; son, Cody Pasley; daughter, Sabrina Pasley; grandson, Owen Michael Dee Pasley; his mother and father, Janice and Larry Fisher; his father and mother, John L. and Debbie Pasley; brother, Joel and Angie Fisher; step-daughters: Sophia Smith, Kathryn Smith and Olivia Smith; nieces: Caitlyn, Callie and Charlie Schwichtenberg; and nephews, Jacob and Tucker Fisher.
He was preceded in death by his sister, Crystal (Pasley) Schwichtenberg.
In lieu of flowers, please send donations to the John Michael Pasley Memorial Fund, which will be set up through First Source Bank. The fund will be used to support the mental health of area law enforcement officers. â€œYou showed me what true love really is and you made me a better meâ€ Love, Susan
Visitation will be held on Tuesday, September 24, 2019 from 4-8 p.m. at the Plymouth Wesleyan Church, 11204 Michigan Street, Plymouth.
Funeral services will be held on Wednesday, September 25, 2019 at 11 a.m. in the Plymouth Wesleyan Church with Pastor Scott Yoder officiating. Visitation will resume one hour prior in the church.
Burial will be in the New Oak Hill Cemetery, Plymouth.