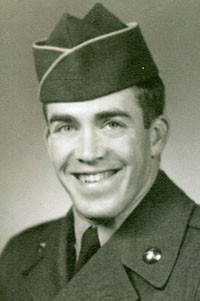 John P. Sarber, Sr., 83, husband, grandfather, brother, and coach, passed away with his family near on Sunday evening, August 30, 2015.
John was born September 21, 1931 in South Bend, Indiana to Charley C. and Estella E. (Hoover) Sarber. The family would move to New Carlisle, where we would graduate from New Carlisle High School with the class of 1949.
In 1949, John would join the US. Army, and then serve in the Army National Guard and the Army Reserves. He would be Honorably Discharged in December of 1982.
In Plymouth, Indiana on March 6, 1965, John would take as his bride Nancy J. Clay. The couple would make Plymouth their home while raising five children. John worked for Pirod/Valmont in shipping and receiving as UPS/FEDEX for 20 years. His gruff exterior only temporarily covered up a kind man with the strength to serve his country, patience to coach children, and the love to raise a family. John was a member of the Plymouth American Legion, the V.F.W., and the Moose Lodge. He served as founder and director for transition league baseball tournaments for 13 years, and was the co-founder, along with Dr. Stohler, of the junior football league. He coached 8-12 year-old football and 6-7 year-old T-ball. John was a generous man, with both his time and money, helping with things in need for the sports he coached. Anyone who knew him knew his sense of humor by the wink of his eye and his grin.
He was a man of many accomplishments in life and will be missed dearly. He loved his wife of 50 years, Nancy, his five children and many grandchildren and great-grandchildren, two sisters: Millie and Shirley, and numerous other family and friends. He will be met in heaven by his parents, and three sisters: Vera, Maxine and a baby sister.
Visitation to celebrate John’s life will be from 4-7 p.m. on Thursday, September 3, 2015 in the Johnson-Danielson Funeral Home 1100 N. Michigan Street, Plymouth.
Funeral services will be held at 11 a.m. on Friday in the funeral home with Rev. Mark Need officiating.
Burial will be in the New Oakhill Cemetery with Military Honors provided by members of the American Legion Post 27, Veterans of Foreign Wars- Marshall County Post 1162 and D.A.V.
Memorial contributions can be made to Riley Children’s Hospital 705 Riley Hospital Dr. Indianapolis, IN 46202.