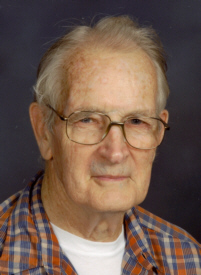 Former Grovertown resident John Richard Carter, 90, entered eternal life at 5:50 p.m. on Friday July 22, 2016 in the Catherine Kasper Life Center in Donaldson. John has resided at the Maria Center for the past three years.
John was born on October 17, 1925 in Eldorado, Arkansas to William H. and Katherine P. (Macnab) Carter. After a move to Chicago, he graduated from Holy Name Cathedral High School with the class of 1943. In late 1943 he enlisted in the United States Navy and served as a teletype operator. While on ship duty John lost a finger in an accident but continued to serve with his disability and was honorably discharged on August 3, 1946. By 1947 the family had moved to a farm they had purchased in Grovertown. There John helped care for the livestock which included goats and rabbits. He developed a love for gardening and later became a Master Gardener.
Through skills he had learned with the Navy, John was widely known for being a ham radio operator and for his electronic repair service he operated in Donaldson. John worked also as a fueler at the Grovertown Truck Stop and later he worked many years for the U.S. Postal Service as a mail clerk in Valparaiso before his retirement in December of 1991. Over the years as an avid reader and a love for lifelong learning, John collected an extensive library on many subjects including literature and poetry. He gladly shared this resource with others. John always remained devoted to his Roman Catholic Faith and was a longtime member of Holy Cross Parish in Hamlet where he served as a Eucharistic Minister and then after moving to Plymouth , St. Michael Church. For many years John served on the Board of the Marshall County Right to Life as an advocate for the unborn.
For his many spiritual traits that made him a fine and caring human being, John had the love and admiration of many who considered him to be a father and grandfather figure even in the absence of having his own family. They will miss him but are comforted in knowing that His eternal light will rest upon him.
John was preceded in death by his parents, brother William, and sister Elizabeth.
Visitation will be on Wednesday, July 27, 2016 from 5-7 p.m. EDT in the Johnson-Danielson Funeral Home 1100 N. Michigan St. Plymouth where a rosary will be recited at 7 p.m.
Visitation will continue after 10 a.m. on Thursday, July 28th in the Catherine Kasper Chapel, located at 9601 Union Road, Donaldson where a Mass of Christian Burial will begin at 11:15 a.m. The Revs. Anthony Spanley and John Zemelko will officiate. A luncheon will immediately follow in the Catherine Kasper Auditorium. A graveside service and burial will be held at 2 p.m. Thursday in the St. Michaelâ€™s Cemetery, Plymouth with Fr. John Korcsmar C.S.C. officiating, follow by Military Honors provided by members of the American Legion Post 27, Veterans of Foreign Wars- Marshall County Post 1162 and D.A.V. The cemetery is located at the corner of Oak Road and Harrison Street.
Memorial contributions can be made to Marshall County Right to Life, P.O. Box 911, Plymouth, IN 46563, Holy Cross Parish, 100 S. Starke St., Hamlet, IN 46530 or The Center at Donaldson, P.O. Box 1, Donaldson, IN 46513.