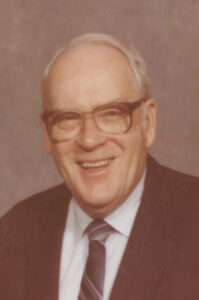 John Richard Lawson, 87, of Red Maple Drive, Plymouth, died suddenly in the Emergency Room of St. Joseph Regional Medical Center-Plymouth Campus, at 11:24 p.m. on Thursday, September 20, 2012. John has been a resident of Plymouth since 2007 coming from Xenia, Ohio.
John was born on November 11, 1924, in Washington Courthouse, Ohio. He was the son of Harry E. and Georgianna (Swonger) Lawson.
He graduated from Washington Courthouse High School with the class of 1942, and enlisted in the United States Army in 1943. He was honorably discharged in 1946.
On April 22, 1951, in the Church of Christ, Hillsboro, Ohio, John and Maxine Zink were married. John was a sales and retail counselor for Super Valu stores for 38 ½ years, retiring in 1989. He continued to work for 17 more years part time for a total of 55 ½ years with the same company.
He was a member of the Washington Courthouse Fayette Masonic Lodge No. 107 for 60 years. In Ohio he was an active member of the Xenia Ohio Memorial Presbyterian Church and the First United Methodist Church in Plymouth. John was a true family man and is survived by Maxine, his devoted wife of sixty-one years and by their daughter, Katherine L. and John Mills, all of Plymouth.
A granddaughter, Holly K. and Michael Cessna of Pittsburgh, PA., and their children: Riley J. and Ian J. Cessna also survive, together with a grandson, John L. and Princessa Mills, Plymouth, and their children: Haley C., John S., Tolman A., Collin R., and Seth D. Mills.
John was preceded in death by his parents, a sister, Margaret Lawson, and two brothers, Edward and Robert Lawson.
The family will receive friends on Sunday, September 23, 2012 from 2 – 3:30 p.m. in the Johnson-Danielson Funeral Home, 1100 N. Michigan St., Plymouth.
Masonic Memorial Rites, will be conducted by members of the Plymouth Kilwinning Masonic Lodge No. 149 F. & A.M., on Sunday in the funeral home at 3:30 p.m. Funeral services for John will immediately follow at 4 p.m. with Pastors Larry Marhanka and Jeff Herron officiating.
Graveside services with Military Honors provided by the Highland County Honor Guard and burial will be held at 2:30 p.m. on Monday, September 24th in the Hillsboro Cemetery, Hillsboro, Ohio.
Memorial gifts in John’s memory may be made to the American Heart Association, 2410 Grape Road, Suite 5A, Mishawaka, IN 46545 or the First United Methodist Memorial Fund, 400 N. Michigan St., Plymouth, IN 46563.