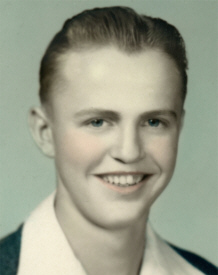 John R. “Jack” Shorter, 89, died in his Webster Avenue home, at 5 p.m. on Sunday, December 22, 2013 following an illness. Jack loved his family and maintained a sense of humor to the end that gave them a sense of peace.
Born in South Bend on August 4, 1924, he was the son of Charles A. and Gale (Martin) Shorter. As a youth the family moved to Marshall County and he graduated from West High School with the class of 1942 and immediately served his country during WWII in the U.S. Army / 277th Field Artillery. On November 11, 1966, in Plymouth, Jack and Ruth E. Barcus were married.
Jack worked in the Studebaker assembly plant and was later a storeroom manager for Bremen Bearing, retiring in the mid 1980’s.
Jack was a member of the D.A.V. and a 35-year member of the Plymouth Moose Lodge.
He is survived by his wife of 47 years, three sons, a daughter, four grandchildren and two great-grandchildren. They are: sons John A. Shorter, Richmond, Virginia, Phillip “Dirk” Shorter of Plymouth and Terry L. (Jane) Shorter, Elkhart, Indiana and their son; Brian (Beth) Shorter and children Addison and Riley. Daughter Holli Shorter-Pifer, husband Steve and children; Corbin Pifer and Blayne, Cameron Pifer and Patrick, and Carson Pifer.
Two brothers, William D. (Helen) Shorter and James L. (Linda) Shorter, both of Plymouth, survive as well along with numerous nieces and nephews.
Jack was preceded in death by his parents, two brothers, Dick and Bob and an infant sister, Beatrice Eloise Shorter.
Friends will be welcomed at the Johnson-Danielson Funeral Home, 1100 North Michigan Street, Plymouth from 11 a.m. to 1 p.m. on Tuesday, December 24, 2013.
Services will immediately follow at 1 p.m. in the funeral home with Life Celebrant Roberta Norris officiating. Military honors will be accorded him by members of the D.A.V., Plymouth American Legion Post 27 and Veterans of Foreign Wars – Marshall County Post 1162.
A graveside interment services will be Thursday December 26th at 10 a.m. in the New Oakhill Cemetery, Plymouth.
Memorial gifts in Jack’s name may be given to the Southern Care Hospice 310 W. McKinley, Suite 340, Mishawaka, IN 46545.