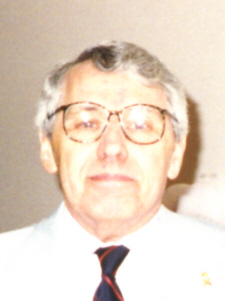 John William Epley, resident of Plymouth, Indiana, died at 5:50 a.m. Saturday, May 3, 2008 in Catherine Kasper Life Center, where he had been a patient the past two weeks.
He was born the son of Lawrence and Jessie Vain (White) Epley, on December 23, 1923, Whiting, Lake County, Indiana. John attended Whiting High School and Indiana University. While in high school, he headed Young America Wants to Help, British War Relief and Junior Red Cross: awarded athletic letter on tennis team.
John served in United States Army as a Sergeant, from 1943 to 1945, CBI (China-Burma-India), was honorably discharged and awarded several medals, including a Battle Star and Presidential Unit Citation. He started a relief program for Hamburg, Germany, after the war and was honored with an award from that city for his post-war efforts.
From 1940 to 1955, he served as Administrative Assistant to two mayors of Whiting and was elected a precinct committeeman and also the Democratic City Chairman.
Employed by Amoco Oil Company (now BP) in 1955, he was then promoted to Manager-Production Control Scheduling, remaining in management until his retirement on October 1, 1986, with over 30 years service. He moved to Plymouth on September 1, 1994.
John was proud of his heritage and received great pleasure in pursuit of genealogy, reading and staying informed. A member of many Who’s Who hereditary societies including the Alexis Coquillard Chapter, sons of the American Revolution, with soldier-patriots in both maternal and paternal sides of family: Founders and Patriots of America, Mac-Alasdair Clan (Scotland); Descendants of Godred Crovan, King of Dublin, Man and the Hebrides (Norse), Sons of the Union Veterans of the Civil War, Sons of Confederate Veterans, American Legion, Post No. 27, Plymouth, Life Member: Veterans of Foreign Wars, Post No. 1162, Plymouth, Life Member; Loyal Order of the Moose, Lodge #741, Plymouth, and others.
John was a unique person and a genealogist, prolific writer of family history, author of many volumes, with copies in the Library of Congress, History Library of the Church of Latter-Day Saints, libraries and historical societies around the United States. He was also nominated for “Who’s Who in the Midwest.”
Preceded in death by his parents, a brother; Lawrence Everett Epley, sisters; Elsie Eveline Stinson, Lyda Fern Trahan Murphy, Hazel Dawn Leech Snyder, infant brother; Jarrett Epley, infant sister; Mae Epley, a nephew; Robert John Stinson, a niece; Dianne M. Tripodi – wife of Roland, and brother-in-law; Robert Stinson.
Survivors include nephews, Roland Everett Leech, Dale Robert (Patricia) Leech, all of Plymouth; nieces, Karen Dawn (Ron) VanDusen, Plymouth; Sherry Lee (Robert) Tuszynski, Naperville, Illinois; Janelle Linda (Walter) Jurkiewicz, Port Henry, New York; great-nephews include; Bruce Tuszynski of Aurora, Illinois, Robert R. Stinson, Jeffrey J. Stinson, both of Texas; Jason Robert Leech, Andrew Clayton “Drew” Leech, Dalton Trent VanDusen, all of Plymouth; Great nieces, Jessica Dawn Lynn Leech of Plymouth and Lori Lynn Self of Texas; several great-great nieces and nephews; brothers-in-law, Robert Omer Stinson, Hammond, Indiana and Gale Murphy, South Bend, Indiana.
Friends are invited to join the family on Wednesday, May 7th from 5 – 7 p.m. in the Johnson-Danielson Funeral Home, 1100 N. Michigan St., Plymouth to celebrate John’s life where services will be held at 1 p.m. Thursday. Calling will continue after 7 a.m. until time of services. Pastor Delmas Stiles of the Good News Baptist Church, of which John was an accepted member will officiate.
Military honors will be accorded by members of the American Legion Post 27.
Burial will be in Big Prairie Cemetery, Epworth Township, White County, Illinois.
Memorial gifts in John’s memory may be made to the Donor’s Choice.