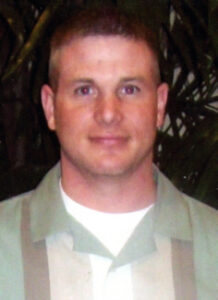 John William Funk, 32, a resident of Hillside Drive, passed away unexpectedly early Friday morning, March 7, 2014.
Born in Marietta, Georgia, John is the son of Fred O. and Kathy D. (Hembree) Funk, who survive. He was a 2000 graduate of Plymouth High School, lettering all four years in wrestling. He studied at Ball State University for two years in criminal justice.
John joined the U.S. Army in 2002, serving our country in Iraq for 16 months. He was honorably discharged on August 12, 2005.
On March 12, 2007 in Plymouth, John married Sarah J. Yakim.
John was always a hardworking man and determined to succeed. He enjoyed working as a local sales representative for AT&T in Plymouth for the past 5 years. He had achieved goals of joining the top 5% of the regional sales reps for three years and was #1 in the Nation for December.
He was also a sports fan, especially baseball, following the Atlanta Braves. He also enjoyed fishing and playing golf. John attended Crossroads Church in Plymouth with his family and was a member of the Sunrise BNI group that met Wednesday mornings.
John is survived by his loving wife, Sarah and their children, Hailey N. Bottorff, Ella G. Bottorff and Sophia J. Funk, all at home; his parents, Fred and Kathy Funk of Plymouth and his brother, Buddy W. (Audra) Funk and a niece, Krislynn D. Funk all of Ft. Wayne. Also surviving is his paternal grandmother, Shirley Funk of Lisbon, ND.
He was preceded in death by his maternal grandparents, James and Pat Hembree, and his paternal grandfather, Otto Funk.
Visitation will be on Tuesday, March 11, 2014 from 5 – 8 p.m. in the Crossroads Church, 1650 N. Oak Road, Plymouth.
Funeral services will be on Wednesday, March 12, 2014 at 2:00 p.m. in the Crossroads Church where Pastor Scott Yoder will officiate.
Burial will be in the New Oakhill Cemetery with a Full Military Honor Detail provided by the U.S. Army.
Preferred memorials are to the Crossroads Church, 1650 N. Oak Road, Plymouth, IN 46563.