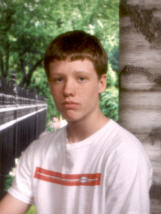 Johnathan A. “John” Haynes, 7719 19th Road, Argos, Ind., died in a single car accident on 19th Road, west of Fir Road, at 10:32 a.m. on Monday, July 28, 2003. He was sixteen years and two months old.
Born on May 17, 1987, he was the son of Charles Haynes and Ravonda Beldon Haynes.
He had just completed his freshman year in Argos High School. A hard worker, he had a summer job baling hay.
During his few years, John lived life to the fullest. He had the endearing qualities of sincerity and compassion for others. He brought joy, laughter and pleasure to those who knew him and everything he did, he did with vigor and verve.
John played soccer on the school team, did weightlifting to keep in shape and enjoyed bowling, fishing and riding his 4-wheeler. He liked to swim, play guitar and sing and had a ball playing basketball with friends.
He was a member of the Walnut Church of the Brethren, Argos.
John is survived by his loving parents, Charles and Ravonda, and by a brother and sister: Waylon, and Melynda, all of Argos.
He is also survived by his paternal grandmother, Sharon Haynes, Plymouth and his maternal grandparents, John and Judy Wallace, Tippecanoe, Ind.
Four uncles and an aunt survive as well. They are: Justin and Terri Haynes, Plymouth; Jake and Theresa Haynes, Elkhart; Dave and Sandra Beldon, and Clint Beldon, all of Tippecanoe and Yvonne and Dan Haas, Plymouth.
Several cousins survive also.
John was preceded in death by Dennis Haynes, his paternal grandfather.
Friends may come to celebrate his young life on Thursday, July 31, 2003, from 4 to 8 p.m. in the Johnson-Danielson Funeral Home, 1100 N. Michigan St., Plymouth. Visitation will continue from 10 to 11 A.M. Friday, August 1, 2003 in the Walnut Church of the Brethren, Argos, IN. where funeral services for John will be held at 11 a.m., with Pastor Tony Schneiders officiating .
Burial will be in the Walnut Cemetery, Argos.
Memorial gifts in John’s name may be made to the Argos High School Weight Room, a place he enjoyed and where he would wish to have enhanced in his memory.