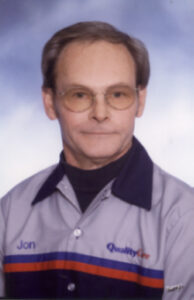 Jon H. King, 58, of Adams Street, Plymouth, died Friday May 30, 2008, in St. Joseph Regional Medical Center, South Bend of Leukemia.
Jon was born July 21, 1949 to Harold and Virginia Grant King in Plymouth.
July 23, 1966 he and Linda Ross were married in the Blissville Church.
Jon worked for Dean’s Food for 36 years, after Dean’s he worked at Oliver Ford for 5 years, up until the time of his illness. He enjoyed drag racing with his son Mickey.
He is survived by his wife, a son Mickey King; a granddaughter Leslie King, a Great Granddaughter Kendall Torones; a mother-in-law Norma Ross; and a brother-in-law Gary (Sharon) Ross all of Plymouth. 4 Nephews and 2 Nieces survive as well.
Jon was preceded in death by his parents, and a sister DiAnne Gonce.
Friends are invited to celebrate Jon’s life with his family on Tuesday June 3, 2008 from 10 a.m. to 12 p.m. at the Johnson-Danielson Funeral Home, 1100 N. Michigan Street, Plymouth.
Funeral services for Jon will be held at 12 p.m. on Tuesday June 3, 2008 in the funeral home. The Rev. Chuck Krieg will officiate.
Burial will be in New Oakhill Cemetery, Plymouth.
Memorial contributions in Jon’s name may be given to the donor’s favorite charity.