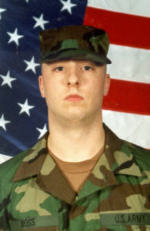 Jonathan B. Ross, a loving son and brother, who would have celebrated his 22nd birthday in six weeks, died on U.S. 6, east of Walkerton, at 9 p.m. on Saturday, June 29, 2002. His permanent address was 16931 6th Rd., Plymouth, Ind. Born in Mishawaka, Jonathan was the son of Jack D. and Jana Smith Ross. He graduated from John Glenn High School with the class of 1999. In January, 2001, Jonathan joined the United States Army as a Private E-2. He took his basic training at Ft. Benning, Georgia and was currently stationed in Vilsek, Germany. Proud to be an infantryman and to serve his country during these difficult times, Jonathan found great satisfaction in the military discipline and physical training of the armed forces. He enjoyed his travels around Germany and was developing an interest in military and German history. An outdoors man, he enjoyed nature and was an avid fisherman. Jonathan is survived by his parents, Jack and Jana, Plymouth, and by two brothers: Brian Smith Ross, Lakeville, and Andrew W. Ross, Plymouth. His maternal grandmother, Joanne Smith, Plymouth, and his paternal grandparents, Wayne and Lucille Ross, Walkerton, also survive, together with Vern Ross, an uncle, Plymouth and three aunts: Marilyn Skiles, Cape Coral, Florida, Judi Macy, St. Petersburg, Fla., Myra Farmer, Sweetser, Ind. Nine first cousins also survive. Jonathan was preceded in death by Gene E. Smith, his grandfather and Laurel Smith, an aunt. Funeral services will be held at 10:30 a.m. on Wednesday, July 3, 2002, at the Tyner Cemetery. The Rev. David Innskeep, pastor of the Tyner United Methodist Church, will officiate. A military honor guard from Ft. Knox, Kentucky, will present full military honors at the gravesite. Burial will be in the Tyner Cemetery. Memorial gifts in memory of this young man may be made to the Marshall County Humane Society.