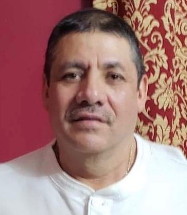 He was a hard worker his whole life working for his family. He enjoyed watching his grandchildren grow. He enjoyed spending time with family and being outdoors. He liked to watch classical movies. He is remembered as a loving father and grandfather.

Jose was a member of St. Michael Catholic Church.

He is preceded in death his parents Enedina Ortiz Arroyo and Elias Ramirez Rangel.

Masks will be required for all in attendance for the services for Mr. Ramirez.