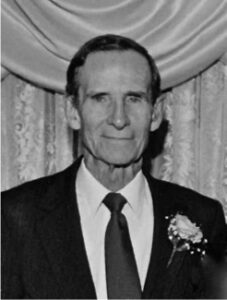 Joseph E. Elkins, Sr., 92, of Wapakoneta, Ohio, died 10:55 a.m., Wednesday, October 30, 2013, at Auglaize Acres. He was born Feb. 19, 1921, in Bourbon, IN, the son of Charles Edward & Mary (Corl) Elkins, who preceded him in death. On May 17, 1947, he married Phyllis C. Keyser, who survives along with their five children and families. They are: Joseph E. (Debbie) Elkins, Jr. of Bluffton, IN, William (Janice) Elkins of Wapakoneta, Jayne (Doug) Place of Wapakoneta, Dr. Frederick (Cheryl) Elkins of Bellefontaine, OH and Beverly (Jeff) Ray of Columbus, OH.
Ten grandchildren, five step-grandchildren, and 22 great grandchildren complete the family.
A sister, Jayne Pesch of Plymouth survives along with a sister-in-law, Edna Wagoner of Plymouth, a brother-in-law, Robert D. Smith of Mishawaka and numerous nieces and nephews.
He was preceded in death by four siblings, Lois Stewart, Max Elkins, Betty Redman, & Donald Elkins, sisters-in-law Margie Smith and Mary Jo Clouse, and a brother-in-law Gene Pesch. Joe was a 1940 graduate of Plymouth’s Lincoln High School, and was a U. S. Army veteran of W.W. II. He worked at McCord Corp., Plymouth, for 21 years and in the 1950’s owned and operated A & W Root Beer Stands, in Bremen & Nappanee, IN. In 1967, he opened the B – K Root Beer Stand in Wapakoneta, which operated with his wife Phyllis until 1983. He was a member of the First United Methodist Church, and the D.A.V., Auglaize Co. Chapter #73, both of Wapakoneta. His other memberships included the American Legion, Post # 173, Bellefontaine, OH, the Loyal Order of the Moose, Indian Lake Ch. #1533, the former BPOE #1170, and the Phi Delta Kappa, Plymouth. He enjoyed carpentry, painting, boating, fishing, and gardening. He took pride in the fact he built 10 homes. While in Plymouth, he played in the Drum & Bugle Corps and served as a Republican Precinct Committeeman. The family will receive friends 2-6 p.m., Sun. Nov. 3, at the Bayliff & Eley Funeral Home, St. Rt. 501, Wapakoneta, and 1 hr. prior to the services at 10:00 a.m., Monday in the First United Methodist Church, Wapakoneta with Pastor Kimberly Pope-Seiberling officiating. Memorials may be directed to the First United Methodist Church, 504 Glynwood Road, Wapakoneta, OH 45895.
A committal service with military honors will take place at 3:00 p.m., Monday, November 4th in the New Oakhill Chapel, Plymouth. Military rites will be provided by members of the Plymouth American Legion Post 27, Veterans of Foreign Wars – Marshall County Post 1162 and the D.A.V.