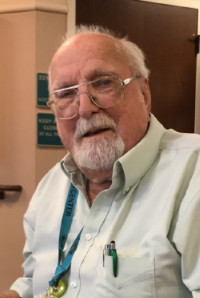 Joseph F. Coury, 96, passed away peacefully at Catherine Kasper Nursing Home in Donaldson on May 15, 2019 surrounded by his loving family. Joe was born in Wheeling, West Virginia on November 21, 1922 to John and Mary J. (Husselbee) Coury. He graduated from Wheeling High School, Washington & Jefferson College in Pennsylvania and received his MBA from Harvard Business School.
On April 29, 1944 in Boston, Massachusetts, Joe married the lovely Dorothy Elizabeth Winters. They lived in Maine, Virginia, South Carolina, California, Florida, Illinois and Indiana, retiring in Plymouth, Indiana and Fort Myers, Florida in 1986. Joe served for our country in the U.S. Navy during WWII aboard the destroyer escort Edward H. Allen and in the Naval Reserve post-WWII. He was Honorably Discharged in 1956.
He is survived by his daughters: Susan Jerutis, Mary (Ron) Gifford, Patty (Gerry) Kucera; grandchildren, Jennifer Jerutis (John Ore), Megan Leyes, (Brian), Sarah Jerutis, (Tim Escudier), Jason Jerutis, (Lindsay), Geoff Gifford, Ben Ostrander, (Claire), Adam Gifford, (Nora), Peter Ostrander, (Kaitlyn) and Sam Ostrander (Aimee Collins-Mandeville); great-grandchildren, Margaret Leyes, Matthew Leyes, Diego Gifford, Molly Leyes, Eliana Gifford, Teddy Escudier, Veronica Ore, Eleanor Jerutis, Auggie Escudier, Amelia Gifford, Frankie Ostrander, Elizabeth Jerutis, Rosa Ore, Hennessy Gifford, Lucy Ostrander, Dorothy Gifford, Miles Jerutis, Everett Ostrander, Olive Escudier and Mickey Ostrander. He is also survived by his sister Mary Mense.
Joe was preceded in death by his wonderful wife of almost 71 years in 2015, his parents, his brothers: Dr. John J. Coury Jr., Dr. Paul E. Coury, Dr. Oswald H. Coury and his son-in-law, Ronald Jerutis
Joe was the Vice President of Nichols-Homeshield for 37 years before his retirement in 1986.
Living in many states due to his career, Joe was involved in his community wherever he lived. Beginning in high school, he was school Vice President his junior year while his older brother served as President. He was a member of the Miami-Dade Chamber of Commerce Board and Miami-Dade Boy Scout Council. In Ft. Myers Beach he was an usher at the Catholic Church and volunteer at the Kiwanis thrift store. In Plymouth, Indiana, he was a member and lector of St. Michael Catholic Church, helped create the Plymouth Industrial Development Corporation, served on the Arts Commission, volunteered at the Marshall County Boys and Girls Club and on the Marshall County Council on Aging Board. Joe was an avid golfer and loved riding around Pretty Lake in his golf cart with Dorothy. He taught his grandchildren to drive the golf cart and later gave his great-grandchildren rides. When Joe moved to Maria Center after Dorothyâ€™s passing he traded his golf cart for an electric wheelchair. That didnâ€™t stop him! He continued to be engaged in many activities including giving the great-grandchildren rides on his new wheels!
Joe had many interests including pre-canceled stamp collecting. There wasnâ€™t a small town he visited that did not include a stop at the post office for their pre-canceled stamp.
Joe had a creative side too. It began in Ft. Myers Beach collecting shells and making shell dolls with a dear friend from college. When he moved to Maria Center his artistic ability transitioned to painting.
Known for his sweet tooth, Joeâ€™s family will never forget his love of Dilly Bars and he will be forever remembered by the sisters and staff at Maria Center and Catherine Kasper Nursing Home as Peppermint Joe.
Visitation will be held on Thursday, May 30, 2019 from 4-8 p.m. in the Catherine Kasper Chapel, 9601 Union Road, Donaldson.
Mass of Christian Burial will held on Friday, May 31, 2019 at 10 a.m. at Ancilla Domini Chapel, 9601 Union Road, Donaldson, with Fr. John Korcsmar officiating. Visitation will resume one hour prior to the start of mass.
A family burial will take place in the New Oak Hill Cemetery with Military Honors provided by members of the American Legion Post 27, Veterans of Foreign War- Marshall County Post 1162 and Disabled American Veteran Chapter 42.
In lieu of flowers, memorial contributions can be made to the Poor Handmaids of Jesus Christ, 9601 Union Road, P.O. Box 1, Donaldson, IN 46513 or the Boys & Girls Club of Marshall County, 314 E. Jefferson Street, Plymouth, IN 46563.