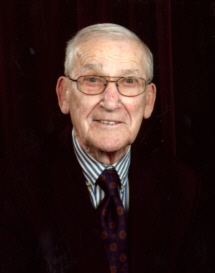 Joseph F. Spehar, 101, passed away on Thursday, May 1, 2014 at 9:50 p.m. at the Catherine Kasper Life Center, Donaldson.
Born on January 14, 1913 in Calumet, Michigan, he was the son of Paul and Mary (Sneller) Spehar. Joe graduated from Visitation Catholic High School in Detroit, Michigan. Joe took Kathleen Sawyer as his bride on January 15, 1938 in Owosso, Michigan. They would share 56 fulfilling years, raising a family, working together and traveling prior to her death on August 8, 1994.
On June 4, 1942, Joe enlisted into the Army/Air Force and served our country during WWII as a Tech Sergeant. He was honorably discharged on November 23, 1945.
Joe began his working career with Pepsi Cola in Flint, Michigan. The family moved to Plymouth in 1964, where he and Kathleen assumed the ownership and operation of the popular A&W Drive-In located on North Michigan Street next to Centennial Park. Every summer, Joe and Kathleen helped shape the lives of many young people who worked there.
Joseph, as he was known to Kathleen, loved to golf year round so in the winter months they often spent time in the Las Vegas area which also provided for other interests. He enjoyed a good cigar, bottle of Heineken or Root Beer Float and was treated to his favorite drinks on his final days.
In South Bend on September 7, 1996, Joe married Betty Thielka. She would precede him in death on February 20, 2013.
He was a member of St. Patrick’s Church in South Bend and St. Michael’s Church in Plymouth. Joe was a member of the Plymouth Moose Lodge 741 and Knights of Columbus No. 1975.
Joe is survived by his daughters, Sharon (Greg) Yambrick of Plymouth and Mary Ann (Larry) McGwin of Walkerton, as well as, 7 grandchildren and 12 great-grandchildren.
The family will receive friends after 10 a.m. Monday, May 5th in St. Michael Catholic Church, 613 N. Center St., Plymouth.
A Mass of Christian Burial will begin at 11 a.m. in the church with Rev. John Korcsmar, C.S.C. officiating.
Military honors will be accorded Joseph at the church following the Mass by members of the American Legion Post 27, Veterans of Foreign Wars – Marshall County Post 1162 and the D.A.V. All are then invited to join in toasting the life of Joseph Francis Spehar at the Knights of Columbus Hall with a luncheon and continued time of sharing memories. In lieu of flowers memorial contributions can be made to the St. Joseph County Right for Life, 2004 Ironwood Circle 130, South Bend, IN 46635 or Marshall County Chapter, 113 E. Washington St. #2, Plymouth, IN 46563.