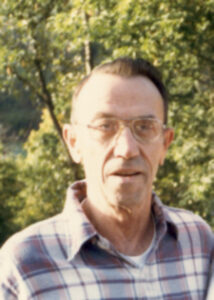 Joseph U. Long, 87, a resident of Plymouth for 80 years, died at his residence at 4:30 p.m. on Thursday, June 19, 2008.
Joe Long and other brave Americans who served with him are an inspiration to patriotism and service.
He is now one of the “Vanishing Vets.”
Born in Morocco, Indiana, on October 27, 1920, Joe was the son of Joseph Edgar and Glenalyn Alice Sinko Long. He quit Plymouth High School in his senior year to fight for his country.
In January, 1942, just weeks after Pearl Harbor was attacked, Joe joined the United States Marine Corps.
He was a Marine corporal and “damn proud of it,” he said in a 2003 interview.
Wounded four times within a 20-minute span by Japanese gunfire, during a Marine landing on Betio in the Gilbert Islands, he was shot in the leg while storming the beach.
He earned two Purple Hearts along with several unit citations and battle stars.
Joe returned home to Plymouth with a medical discharge in October of 1945.
On June 4, 1946, Joseph and Nellie E. Long were married.
He worked in Bourbon for 2½ years at Elcar Coach and later, first as a deliveryman and then manager, of Clean towel Services for 24 years. He also worked for American containers for 11 years, retiring in May, 1983.
He was a proud member of the VFW, Disabled American Veterans and the American Legion.
Joe and Nellie enjoyed traveling. In a five-year span, they visited nearly every state in the union
For years, as one of the few of the 110 original members, he looked forward to the yearly reunion of F Company of the Second Marines.
Joe is survived by Nellie, his devoted wife of 62 years, Bremen Health Center, Bremen, and by two sons: Terry J. (Teresa) Long of Argos and their children: Michael, Elizabeth, Holly and Joseph and Bill L. ( Lois) Watson of Plymouth and their children: Yvonne Rene, Justin Lars and William Lee and 15 great-grandchildren.
Joe was preceded in death by his parents and by three brothers and a sister. They are Karrol and Kenneth Reading , Robert Long and Elizabeth Long.
Friends are invited to share memories with Joe’s family from 4 to 8 p.m. on Monday, June 23, 2008 and after 7:00 a.m. on Tuesday, June 24, 2008 at the Johnson-Danielson Funeral Home, 1100 N. Michigan St., Plymouth.
Funeral services will be held at 2:00 p.m. on Tuesday, June 24, 2008, in the Johnson-Danielson Funeral Home. The Rev. Charles Krieg will officiate. Burial will be in New Oakhill Cemetery, Plymouth, with full military graveside ceremonies provided by the Plymouth Veteran’s of Foreign Wars Post 1169 and the Plymouth American Legion Post 27.
Memorial gifts in Joseph’s memory may be given to the Center for Hospice and Palliative Care, Inc.