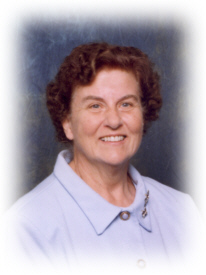 Former Plymouth resident, Josephine Eleanor Baker, after a long illness, was called home to be with her Lord from her son’s home in Portage, Michigan, at 7:29 a.m. on Tuesday, March 22, 2011.
Born on June 15, 1934, to Paul and Pauline (Ritter) Lamprecht, in Ft. Wayne Ind., she moved to the Plymouth area in 1951. She went to Bremen schools and immediately began attending Shiloh Wesleyan Church where she met and married her husband of 56 years, Harold W. Baker on October 10, 1954 in the Shiloh Church.
She lived her life as a housewife and as their family grew, she became more and more devoted to the children of this community.
Josephine was a Shiloh Church Sunday School teacher for over 45 years, a Cub Scout Den Mother for Jefferson School Pack 222 for 8 years, an active Plymouth High School band supporter for 12 years and the leader of Shiloh Church Kid’s Club, Bible School and Junior Church for over 15 years.
Her dedication to the upbringing of children was well known and there are many in the Plymouth community who were not only taught by Josephine, but whose children were taught by her as well.
Friends are welcome to visit with the family at the Johnson-Danielson Funeral Home, 1100 North Michigan Street, Plymouth, on Friday, March 25, 2011 from 4 to 8 p.m.
Funeral services for Josephine will be held at 2 p.m. on Saturday, March 26, in the Shiloh Wesleyan Church, 10532 4B Road, Plymouth where visitation will continue one hour prior to services. The Rev. John Perkinson will officiate.
Entombment will be in the New Oakhill Mausoleum.
Memorial gifts in Josephine’s name may be made to her church.
Josephine was preceded in death by both of her parents and one older sister, Jeanette Thomas of North Webster, Ind.
She is survived by her husband, Harold, formerly of Plymouth, her son David and his wife, Jeri, of Portage, Michigan, her daughter Ruth and husband John Prator of Centerville, Mo., her son John and his wife, Michelle of Oakdale, MN., and her son Mark and his wife, Rebecca, of Columbia City, IN and 6 grandchildren. She is also survived by her older brother, Paul Lamprecht of Andrews, IN. and her older sister, Mildred Gray of North Webster, IN.
She will always be in our hearts as we were always in hers.