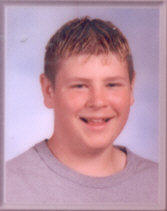 Joshua “Josh” Michael Edward Fisher, died too young, too soon. He was 15 days away from celebrating his 17th birthday.
Tragically, the popular Plymouth High School junior died at 7:55 p.m. Tuesday night, March 2, 2004, from injuries caused by an automobile accident Sunday evening, February 29, 2004. Hospitalized in Parkview Hospital, Fort Wayne, Ind., Josh died with his parents and his youngest brother, Nick, at his side. It is an agonizing loss to his family, his friends and to all who knew him.
Josh, known among his friends as “Big Fish,” was a gentle giant with a sweet disposition. During his few years, he showed endearing qualities of friendliness, sincerity and compassion for others.
Born in South Bend on March 17, 1987, Josh was the oldest son of Michael Anthony and Jo Ann Whitesell Fisher. He attended St. Michael’s Catholic School and Menominee Elementary School and was presently a junior in Plymouth High School Class of 2005.
Enthusiastic, with a love of life, he did his best at every thing he was involved with: especially sports. He was an all-around athlete. He loved basketball and baseball but his passion was football. He and his family were heavily involved in the Marshall Co. Junior Football League and in high school he played center and defensive tackle on the JV team. His dream was to play for the University of Miami, Pro ball and then coach. He had a special admiration for Lou Holtz.
He had played baseball since he was one-year-old. He collected baseball cards and sported memorabilia of such idols as “Shoeless” Joe Jackson and the “Big Hurt” Frank Thomas.
In basketball, Josh served as manager for the varsity team his freshman year and, as a sophomore, he played on the high school JV team and in the Plymouth Summer Basketball League.
He was a member of St. Michael’s Roman Catholic Church and practiced his faith by having no barriers to friendships. A volunteer at the Boys & Girls Club, he was a mentor to many younger children and enjoyed working with area kids. He openly supported the Right To Life.
Josh loved electronic games and all kinds of music. He had sung in the school choir since the 6th grade to the present time.
Very close to his younger brothers, he followed their activities faithfully and was a loving “big brother” to them and others.
Josh is survived by his loving parents: his mother, Jo Ann and his father, Mike, both of Plymouth; and by two younger brothers, Benjamin Joseph Wayne Fisher, a 7th grader and Nickolas Derrik James Fisher, a 6th grader, all at home at 10557 Muckshaw Road, Plymouth.
His maternal grandparent, Barbara A. Boggs and paternal grandparents, Anthony M. and Olive E. Fisher, all of Plymouth and Marjorie Reinholt, a maternal great-grandmother of Logansport also survive along with numerous aunts, uncles, cousins and friends.
Josh was preceded in death by grandparents Bill Massey, Okle Whitesell, Leah Hunnicutt, Lavon Reinholt and Dale Boggs.
Visitation and sharing of memories of Josh with his family will be on Sunday, March 7, 2004, from 1 to 8 p.m. in the Johnson-Danielson Funeral Home, 1100 N. Michigan St., Plymouth, Ind. At 7:30 p.m. a Scripture Service will be held.
A Mass of Christian Burial will take place on Monday, March 8, 2004, at 11 a.m. in St. Michael’s Roman Catholic Church, 625 N. Center Street, Plymouth. The Rev. Father William Kummer will officiate.
Interment will be in St. Michael’s Catholic Cemetery, Plymouth.
Josh will always be loved and remembered. Donations in his memory to the Josh Fisher Memorial Fund, First Federal Bank, P.O. Box 159, Plymouth, Ind., will assist the family with expenses and preserving his memory.