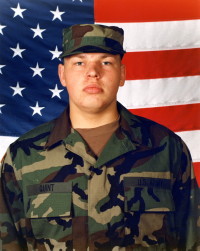 Joshua Eric Lee Quint, 34, passed away peacefully on Tuesday May 12, 2020 following complications stemming from an extended illness. Born July 28, 1985 in Mishawaka to Gerald Lee and Yvonne Marie (Moyer) Quint, Joshua was a lifelong resident of Plymouth having graduated Plymouth High School with the class of 2004. Shortly thereafter enlisting in the Indiana National Guard, having served 2 tours of duty in Iraq as a turret gunner with the 151st Infantry, (C co). It was between these tours that on September 29, 2008 he married Crystal Potter in a small ceremony with close family and friends by their side.
Always a source of conversation and insight to anyone who had the privilege of knowing him. Joshua was in many ways a unique person, widely admired for going out of his way to make sure those in his presence, both family and stranger alike, felt comfortable. Willing to strike up a conversation or befriend people of all kinds, there was absolutely no limit he would not extend to those who he cared for. His personality being that of someone who was kind, compassionate, with unwavering loyalty towards his loved ones, as well as having an immeasurable natural wit to accompany his equally large whimsical nature. Always the protector, for many people, Joshua was the one person that in the midst of any situation, his presence would automatically make you feel safe and assured. Having many interests, most notably being widely known for his extensive collection and knowledge of cinema, games and pop culture. He liked attending everything from theatres, comic book conventions, beer festivals and anywhere a “good deal” could be found. His pride really shined when talking about his 4 children and he never left out a chance to ask them to show you what they had most recently learned, rather it be an academic milestone such as the alphabet, or some quirky fact, there he would be behind them beaming with a pride filled smile. The impact he left on his loved ones will be everlasting as he was such a very big as well as important part to so many people’s lives. To say he will be greatly missed would be an understatement and having the memories and plentiful stories to share and pass on in the future are now treasured by all who had the honor of calling him family or friend. Joshua is survived by his wife Crystal (Potter) Quint of Plymouth; parents, Gerald Lee and Yvonne Marie (Moyer) Quint of Plymouth; brothers, Matthew Nemeth of Illinois, Adam (Christina) Quint of Plymouth; sister, Katrina Quint of Plymouth; children, Bruce Danger Lee, Cortana Eva Rayne, Dexter Kaos Blade and Erin Gemma Rae of Plymouth, as well as several aunts, uncles, cousins, nieces and a nephew. He was preceded in death by his grandparents; Robert and Luella Moyer and Emil Quint; uncle, Niel Moyer; cousins, Nicole Quint and Ashley Williams. Due to the limited number on social gatherings, a small private ceremony will be held.
Memorial contributions can be made to the Disabled American Veterans Chapter 42, 1305 W. Harris St. Plymouth, IN. 46563.