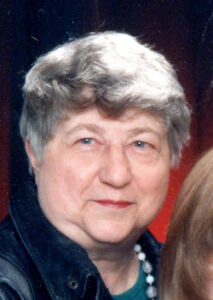 Joyce E. (Holderead) Jones 84, of Plymouth passed away on Saturday September 16, 2017 at her home in Plymouth. She was born on November 27, 1932 in Plymouth to Virgil Geisleman and Helen Holderead.
Joyce graduated from Plymouth schools and has lived her entire life except for 3 years when she lived in Cassopolis, Michigan. She was employed at the La Petite Bridal Shop as a seamstress for many years. She was also an avid reader and avid bowler for many years. She married Charles Jones on June 13, 1954 in Plymouth and he preceded her in death on March 7, 2016.
Surviving are three daughters- Rhea Webster and Melanie Jones both of Plymouth and Alicia Jones of Springboro, Ohio and one son-Rhett Jones of Plymouth and one grandchild. Also surviving are one half-sister- Juanita Suseland and one half-brother- Virgil Geisleman both of Plymouth.
She was preceded in death by her parents and husband Charles, and sisters- Betty Smith, Mildred Kuchenmeister, Donna Park and brothers- Richard and Chester Geisleman.
Visitation for Joyce will be held on Thursday September 21, 2017 at the Johnson-Danielson Funeral Home 1100 N. Michigan Street, Plymouth from 1:00-to-3:00 P.M. and funeral services will take place at 3:00 P.M. also at the Johnson-Danielson Funeral Home with pastor Les Johnson officiating. Inurnment will take place at Oak Hill Cemetery, Plymouth at a later date.
Memorials should be directed to American Diabetes Association.