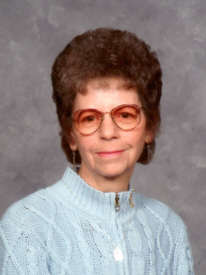 Joyce Williams, 79, a former River Park resident of Plymouth, was peacefully called home with family at her side, on Thursday, May 11th at 2:20 p.m. in the Meadows Care Center â€“ Warsaw. She has made Warsaw her home since 2014.
She was born Joyce F. Epson on November 29, 1937 in Gary, Indiana, the daughter of Marvin Stanley Epson and Bernice R. (Hanaway) Epson-Asher. She was raised in northwest Indiana and graduated from Hebron High School in the Class of 1955.
She became the bride of Ronald D. Williams on September 15, 1956 in Hebron, Indiana. He preceded her in death on April 20, 1991.
Joyce moved to Argos in 1971 and Plymouth in 1995. After 25 years she retired from Ristance Wire in 2002.
She faithfully attended Mass as a member of St. Michael Roman Catholic Church in Plymouth. She loved her family and in her earlier years enjoyed gardening and sewing.
Joyce is survived by her family of five children: Teri L. (Winterrowd), (Tom) Styles of Warsaw, Julie Williams of Lubbock, TX, Doug R. (Terri) Williams of Carmel, IN, Kevin M. (Barbara) Williams of Buckeye, AZ and Danny J. Williams of Warsaw, Indiana. Eleven grandchildren and five great-grandchildren also survive as well as a sister Karen (Herb) McMahon of Hebron, a brother Jerry (Sylvia) Epson of Sebring, Florida and several nieces and nephews. Preceding in death were her parents, spouse, and a brother Devon â€œDonâ€ Epson.
Visitation will be held on Monday, May 15th in the St. Michael Catholic Church, 625 N. Center St., Plymouth from 12 noon until 2:00 p.m. EDT. A Mass of Christian Burial will begin at 2:00 p.m. with Pastor Fr. John Korcsmar C.S.C. officiating.
Burial will follow in the St. Michael Cemetery, Plymouth.
Preferred are memorial gifts to St. Michael Parish, 612 N. Walnut St., Plymouth, IN 46563 or the American Diabetes Association, 115 S. Lafayette Blvd., South Bend, IN 46601.