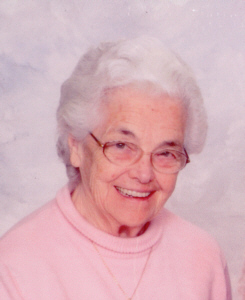 Joyce I. Dawson, 85, of Heber City, Utah, formerly of Plymouth, Ind., died of natural causes in the Rocky Mountain Care Center, Heber City, Utah.
Joyce was born in South Bend, Ind., on July 14, 1925. She was the daughter of Ray and Nancy Yoder Granning. She attended South Bend Schools.
On March 3, 1946, in South Bend, she and Charles E. Dawson, Jr., were married. Charles died on April 16, 1992.
A homemaker and an avid reader, she was a resident of South Bend until 1975, when she moved to Plymouth.
She was a member of the Apostolic Temple in South Bend.
Joyce is survived by two sons: Charles R. (Michelle) Dawson, Heber City, Utah and Dennis L. Dawson, Phoenix AZ Five grandchildren and thirteen great-grandchildren also survive.
Two sisters in Plymouth survive as well: Jacqueline Snyder and Marybeth Jaarda.
Two brothers also survive. They are David Granning, Baldwin, Mich. and Michael (Judy) Granning, Ft. Wayne, Ind.
Joyce was preceded in death by her parents, her husband and one brother, Owen Granning.
Family and friends will gather at the Johnson-Danielson Funeral Home, 1100 N. Michigan St., Plymouth from 5 – 8 p.m. on Thursday, April 14, 2011. Funeral services will be conducted at 11:00 a.m. Friday in the funeral home; the Rev. Rex Fredricks will preside.
Burial will follow in the New Oakhill Cemetery, Plymouth
Memorial contributions may be made to the Apostolic Temple, 2221 S. Ironwood Drive South Bend, IN 46613 South Bend, In.
Messages of condolence and the sharing of memories may be sent to the family via the funeral home’s website: www. johnson-danielson.com