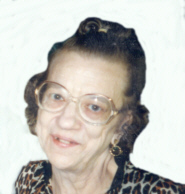 Juanita R. Ivins, 76, formerly of Randolph St.., Plymouth, died of natural causes in Miller’s Merry Manor, Plymouth, at 12:20 a.m. on Sunday, February 6, 2005.
Juanita was born in Plymouth on March 1, 1928, the daughter of Harry F. and Cecilia B. Hartman Brundige. She graduated from Plymouth High School with the class of 1946.
On May 30, 1948, in St. Andrews Church, Grand Haven, Michigan, Juanita and Harold Y. Ivins were married. Harold died on August 25, 1989.
A homemaker, she lived most of her life with her husband in Illinois.
She enjoyed movies, working on puzzles and traveling. During her years of traveling Juanita and her husband collected souvenirs from all over the country.
She was a member of St. Michael’s Roman Catholic Church.
Juanita is survived by a brother and sister. They are Forest V. and Darlene Brundige, Frostproof, Florida, and Helen Haines, Plymouth.
Three nephews and two nieces survive as well. They are Tom Haines, Plymouth: Harold and Sarah Davidson, Elkhart: Connie and Cecil Ottow, Jr., Plymouth: Cathie and Ed White, Clarkston, Michigan and Leslie Dyer, White Lake, Michigan.
Juanita was preceded in death by her parents, her husband, Ilene and Gene Davidson, a sister and brother-in-law.
Friends will be welcomed by the family on Wednesday, February 9, 2005, from 4 to 7 p.m. at the Johnson-Danielson Funeral Home, 1100 N. Michigan St., Plymouth. A Rosary will be prayed at 7 p.m.
A Mass of the Resurrection will be held on Thursday, February 10, 2005, at 10 a.m. at St. Michael’s Roman Catholic Church, 611 N. Center St., Plymouth. The Rev. Father William Kummer, pastor of the church, will officiate.
Burial will be in New Oakhill Cemetery, Plymouth.
Memorial gifts in Juanita’s memory may be made to the American Council of the Blind, 1155 15th Street NW, Suite 1004, Washington, D.C. 20005