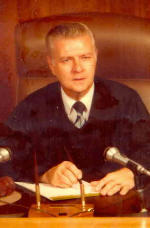 Judge R. Alexis “Lex” Clarke, 75, of 407 N. Michigan Street , died at his home at 6 a.m. , Friday, April 5, 2002 , in the loving care of family and the Marshall County Hospice. He had been in failing health for the past several years. R. Alexis Clarke retired as Judge of the Marshall Superior Court at the end of 1988, after twelve years of service in that post. A practicing attorney for 25 years at Plymouth and Bremen , prior to his becoming Judge, he also served as Marshall County State Representative in the 89th Indiana General Assembly. He was born November 3, 1926 , to H.E.G. and M. Grace ( Hutchinson ) Clarke, at Grand Rapids , Michigan , moving to Marshall County in 1937. He had been a resident of the County since that date. He was married on July 22, 1955 , at Angola , Indiana , to Sally Ann Treat, who survives. He is also survived by two sons: Robert A. Clarke of Bremen , and Richard T. Clarke of Monticello , and a daughter, Cynthia A., and her spouse, Scott Fozo, of Mishawaka . Five grandchildren also survive: Megan and Jackson Clarke and Scott, Brock and Susan Q. Fozo. Mr. Clarke is survived by two brothers, Eric G. (Esther) Clarke of San Pedro , Calif. , and William C. (Rose Mary) Clarke of Indianapolis , and a sister, Patricia (Mrs. Charles) Cook, of Plymouth . His parents, a brother, Jack Clarke, and a sister, Joyce Drubert, preceded him in death. Mr. Clarke attended Inwood and Washington Elementary schools and Plymouth and Argos High Schools, graduating from Argos High School in 1945. He left high school his senior year to join the United States Navy during World War II, serving from 1944 to 1946. He attended Indiana University and Boston College Law School and the University of Mississippi Law School , where he earned his L.L.B. degree in 1951. In law school, he was a member of Phi Delta Phi legal fraternity and was co-winner of the Phi Alpha Delta Final Moot Court Competition. Mr. Clarke was also a graduate of the Indiana Judicial College and the American Academy of Judicial Education. Following graduation from law school, he was law editor for Bobbs-Merrill Co., Indianapolis . In 1952, he began law practice in Plymouth, and was appointed Marshall County and Third District Young Republican Chairman. In 1953, he became Assistant Secretary of the Indiana State Senate at Indianapolis. Later that year, he was appointed by United States Senator Homer E. Capehart to his staff in Washington , D.C. , serving until August, 1954, where he authored the “Legislative History of the Export-Import Bank of Washington .” He returned to Marshall County to seek a seat in the State Legislature and was elected and represented Marshall County in the 89th Indiana General Assembly, where he served on Judiciary A and Judiciary B Committees of the House of Representatives. He received the Distinguished Service Award from Indiana Governor George N. Craig for his work in the legislature. In 1959, Mr. Clarke moved his law practice and family to Bremen , where they lived until 1983. He served as the first Marshall County Deputy Prosecuting Attorney. He also served 17 years as German Twp. Attorney, 10 years as Bremen Town Attorney and 11 years as Bremen School Attorney. He was a member and President of the Bremen School Board, President of the Bremen Chamber of Commerce and President of the Kiwanis Club. He was a Republican precinct committeeman and a delegate to six Republican State Conventions. He held membership in the Bremen American Legion for more than 35 years and he was a member of the 1st. United Church of Christ. He was presented the Jaycee Outstanding Citizen Award at Bremen . He was also given the Distinguished Alumni Award by Argos High School . Clarke was also an Eagle Scout. During the early 1970s, Mr. Clarke was appointed by Governor Otis R. Bowen to the State Office Building Commission and the Wage Adjustment Board. Judge Clarke was presented with a commendation in 1988 from the Indiana Supreme Court for his judicial services. He was twice named a Sagamore of the Wabash by Indiana Governors Otis R. Bowen and Robert D. Orr for his service to the State of Indiana . In 1983, Judge Clarke and Mrs. Clarke moved to Plymouth . While Judge, he served as a member of the Supreme Court Committee on Character and Fitness, member of the Marshall County and Indiana State Bar Associations and the Indiana Judges’ Association. He was a long time member of the University of Mississippi Alumni Association and a life member of the Marshall County Historical Society. His biography has appeared in several editions of “Who’s Who in American Law.” Services will be held at 11 A.M. , Monday, April 8, 2002 , in the Johnson-Danielson Funeral Home, 1100 N. Michigan St. , Plymouth . The Revs. Dr. Ronald Liechty and Susan Sickelka will officiate. Burial will follow in the New Oakhill Cemetery , Plymouth . Graveside military honors will be provided by the Bremen American Legion Post 191. Friends may call at the funeral home from 2 to 6 P.M. Sunday, April 7, 2002 . Memorial contributions may be made to the Marshall County Hospice or charity of choice.