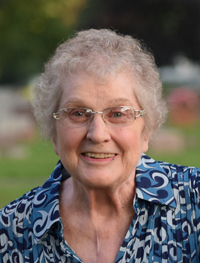 Judith Ambrose, 76, of Plymouth, passed away of natural causes at 8:45 AM Sunday, September 11, 2016 at Saint Joseph Regional Medical Center â€“ Mishawaka.
The daughter of Delwin Libby, Judy was born December 12, 1939 in Rockport, Indiana. On July 19, 1958, Judy and James were married in LaPorte. He preceded her in death December 14, 2013.
In 1958 she graduated from Kingford Heights in LaPorte.
Judy was a homemaker. She loved playing Bingo. Judy is survived by her two sons; Jerry L. (Kelly) Ambrose of Plymouth, and Jim G. Ambrose of Muncie; five grandchildren; Brian (Abbey) Ambrose, Whitney (Scott) Ballinger, Erica (Aaron) Zell, Jared (Jodie) Ambrose and Dexter Ambrose; two great-grandchildren; Noah and Samantha Ambrose. Also surviving is a sister; Mary Lou Bock of Victoria, Illinois, and a step-sister; Judy Dobbins of Chesterfield, Indiana.
She was preceded in death by her parents, husband, and one brother; Herman Alan Libby.
Friends may visit with the family from 4-7 PM on Friday, September 16, 2016 in the Johnson-Danielson Funeral Home, 1100 North Michigan Street, Plymouth. A Celebration of Judyâ€™s life, officiated by her family will be held immediately following the visitation at 7:00 PM Friday in the funeral home.
A private burial will be held at a later date. Memorial gifts in Judyâ€™s memory may be given to the American Kidney Foundation, 180 North Wabash Avenue, Suite 320, Chicago, Illinois 60601 or the American Heart Association, 6500 Technology Drive, Suite 100, Indianapolis, Indiana 46278.