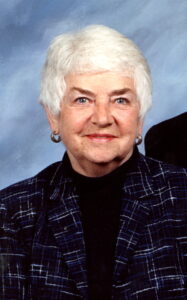 Judith D. Guild, 88, passed away peacefully Monday, January 20, 2020, with family by her side.
Judy was born April 19, 1931, in Logansport to Frederick Grahs Drompp and Lucile Barnes Drompp. She graduated from Logansport High School in 1949 and from DePauw University in 1953.
At DePauw she served as president of the Panhellenic Council as well as president of her sorority, Kappa Kappa Gamma. While at DePauw she met the love of her life, J. Kent Guild. The two were married on June 25, 1955, in Logansport, Indiana.
Judy taught elementary school in Logansport following graduation. Kent’s early professional life as a physician took them to Chicago, Indianapolis, and Beale Air Force Base, California. They came to Plymouth in 1961 where they ultimately built their home on Nutmeg Road and raised their four children.
Judy’s activities varied through her life, but she was always finding a way to serve. She taught Sunday School and served on multiple committees at First United Methodist Church. She led the Lucky 4 4-H Club, and she served on the Plymouth Public Library Leasing Corporation. She volunteered to regularly set-up cots for the children at the community day care center. She was a volunteer for the Red Cross Bloodmobile for over 50 years. She served as president of Lake Maxinkuckee Environmental Council. She and Kent were named the 2001 recipients of the Community Spirit Award at the hospital’s annual “Catch the Spirit” gala.
Judy’s largest volunteer efforts came through the organization of Tri Kappa, the women’s Indiana philanthropic organization. At the local level she chaired multiple project committees and worked her way through the chapter officers. She then gave her time at the state level where she ultimately became Council President over the state organization. She served on the Indiana State Board of Health. She was bestowed the honor of the Sagamore of the Wabash by Governor Robert Orr. Judy had a close association with Lake Maxinkuckee that she inherited from three previous generations of family and continued to share with her children and grandchildren. There she swam across the lake and learned at a young age to skipper the C-Scow sailboat which she continued well into her 80s. She spent weeks and months there every summer her entire life. Judy had varied interests. She loved a good hand of bridge, euchre, hand and foot, and gin rummy with friends and family. Dominoes, backgammon, and Puno Uno were often going on around her kitchen table. She always was up to date on the latest sporting events. She enjoyed good theatre and was an avid reader.
Judy is survived by children John K Guild, Jr of Indianapolis and wife, Dana; Anne Guild Adams of Indianapolis and husband, Brian; Steven A Guild of Kernersville, North Carolina, and wife, Teri; and Sarah Guild Smith of Plymouth and husband Timothy. Kent and Judy have 12 grandchildren: Emily Judith Adams, Laura Elizabeth Guild, Sarah Ruth Adams, Kent Guild III, Kevin Stuart Adams, Ellen Guild Smith, Curtis Guild Smith, Leah Guild Smith, Hugh Guild Smith, Kaitlyn Faith Guild, Allison Grace Guild, and David Allan Guild.
Judy is preceded in death by her parents, husband, and sister, Carolyn Drompp Moore. She is survived by her sister Joan Drompp McAfee of Pisgah Forest, North Carolina. She is also survived by many nieces, nephews, and extended family.
Friends may call on Friday, January 24, from 4:00 p.m.-7:00 p.m in the Johnson-Danielson Funeral Home, 1100 N Michigan St, Plymouth. A memorial service celebrating her life will be held at 1:00 p.m. Saturday, January 25, at Plymouth First United Methodist Church, 400 North Michigan Street, Plymouth with visitation for one hour prior to the service. Rev. Toni Carmer of First United Methodist Church will officiate. In lieu of flowers, memorial gifts may be made to: Boys and Girls Club of Marshall County, 314 E Jefferson St, Plymouth, IN 46563; Tri Kappa Scholarship Endowment Fund, 941 E 86th St, Suite 103, Indianapolis, IN 46240; or Plymouth First United Methodist Church, 400 N Michigan St, Plymouth, IN 46563.