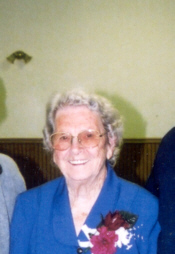 An area resident most of her life, Julia E. Emmons, 90, 13321 4th Road, Plymouth, died of natural causes at 10:55 p.m. on Sunday, May 4, 2003, in Miller’s Merry Manor, Plymouth.
Julia was born in Janesville, Wis. on November 15, 1912, the daughter of Allen T. and Julia Washburn Taylor. She attended Plymouth schools.
On May 12, 1930, in Knox, Ind., she was married to Karl E. “Bill” Emmons. Bill died on November 5, 1976.
Julia had worked at Meck’s in Plymouth for four to five years. She and her husband then ran Bill’s Service Station which was next to where McDonald’s (on U.S. 31 north) is now from 1936 to 1943. They then ran Bill’s Frame and Wheel and Emmon’s Shell station. They built the B.J. &. J restaurant at U.S. 6 and 31 in 1955 and ran it for several years.
In addition, Julia was an active homemaker. She enjoyed weaving rugs, quilting and watching baseball. She baked delicious pies and cakes and loved spending time with her family.
She was a past member of the Royal Neighbors Club.
Julia is survived by two sons and two daughters. Her daughters are Julia F. Hurford and Judith A. Veger, both of Plymouth, Ind. Her sons are Karl Jr. “Sonny” and Mary Anne Emmons and Roger L. and Deborah Emmons, both of LaPaz, Ind.
Twenty-four grandchildren, 50 great-grandchildren and 25 great-grandchildren also survive together with two sisters and two brothers. Her sisters are Lucille and Gilbert Helwig, Niles, Mich., and Edna and Bill Duffy, Wis. Her brothers are Clifford Taylor, Ark., and Eugene Taylor, Chicago, Ill.
Julia was preceded in death by her parents, her husband, Shirley Jean Albert, a daughter and two sons-in-law, Frank W. Hurford and Joe Veger. A daughter-in-law, Betty Emmons and three great grandchildren and five brothers have also died before her.
Visitation will be on Wednesday, May 7, 2003, in the Johnson-Danielson Funeral Home, 1100 N. Michigan St., Plymouth, from 4 to 8 p.m.
Funeral services will be on Thursday, May 8, 2003, at 10 a.m. in the funeral home. The Rev. Charles Krieg, pastor of the Salem United Methodist Church, Bremen, Ind., will officiate.
Burial will be in the Bremen Cemetery, Bremen, Ind.
Memorial gifts may be made to the Union North Ambulance Service and LaPaz Fire Department.