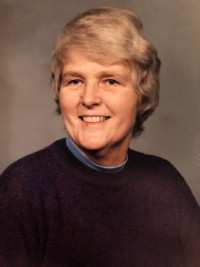 Juliet Morgan, 82, of Plymouth, Indiana passed away early Saturday morning, January 18, 2020, at Millers Merry Manor in Culver. Julie was born on Saturday, January 30, 1937, in Clacton-on-Sea, Essex, England, the only daughter of the late Gordon and Doris (Claydon) Wall.
At the onset of World War II, the family moved to the Isle of Wight in the belief that it would be safer. Here they lived in Ventnor, but after the fall of France, they found themselves on the front-line and unfortunately very near the enormous Chain Home radar mast that became a prime target for the Luftwaffe during the Battle of Britain in 1940.
The family moved to a small 30-acre farm called Fernhill at Wooton Bridge. Here Julie helped with rearing pigs whom she named “The Boys of St. Oswald’s”. After the war, her father’s civil engineering firm required her parents to travel on business and Julie was enrolled at the Upper Chine boarding school.
After graduating at the age of 16, she enrolled at Bristol University to work for a Veterinary degree. Unfortunately at the end of her first year, she had to leave to help nurse her mother who contracted cancer. After a successful surgery by Lord Moran, physician to both Winston Churchill and King George VI, and a long period of recuperation, her mother recovered fully. Julie worked for a year on a farm in Wiltshire near Swindon.
Julie was then recruited by the Medical Research Council unit at the Atomic Energy Research Establishment at Harwell, Berkshire where she worked on the distribution of Strontium-90, a major component in atomic bomb fallout, in animals and humans. While at Harwell she met John Morgan, a radiochemist, and they married at Wantage registry office on February 28, 1959. Two days later they boarded a Britannia prop jet at Heathrow Airport and, after stops at Zurich, Beirut, Karachi, Calcutta, Rangoon, Singapore, Djakarta and Darwin, they landed in Sydney, Australia.
They both worked at the Australian Atomic Energy Commission at Lucas Heights, outside Sydney. During this time daughter, Susan was born on January 22, 1962. Shortly afterward they all moved to Canberra, Australia’s Federal Capital but at that time only the size of a small country town. While here, Julie studied for a bachelor’s degree in Biology. On March 28, 1966, son Alan was born, and in the same year, Julie graduated and won the Priscilla Fairfield Bok Prize for the best female student. Subsequently, they returned to Sydney and Julie enrolled at Macquarie University for a master’s degree in Ecology.
On completion, the family emigrated to the USA and Julie undertook a Ph.D. course in Mycology at the University of Kentucky, which was awarded in 1970. The family moved to Chicago and Julie engaged in research on Muscular Dystrophy at Billings Hospital at the University of Chicago.
Julie retired in 1995 and after much research elected to live in Plymouth. She maintained an interest in research and participated in many Earth Watch projects all over the world but most particularly at the Rocky Mountain Biological Laboratory and participating in several Marine Biology cruises in the Caribbean.
Not only was Julie Morgan a brilliant scientist, but she was also an amazing mother to her surviving children Alan Morgan and Susan Morgan. Julie was not a conventional parent, she believed in providing her children with well-rounded experiences, excellent education and advice only when asked. Her children accompanied her on Earth Watch trips to the Colorado Rockies, and snorkeling trips to the Exumas. Their childhood was filled with paddling in tide pools, tromping through forests, examining lichens, collecting samples of water from creeks. Julie instilled that love of traveling and adventure in both her son and daughter.
In Plymouth, Julie was involved in church affairs as well as tutoring students in many scientific and mathematical subjects. Julie was a kind, generous person, who would help anyone in need. She never wanted anything in return, no glory, no pats on the back, she did those things because she cared about humanity.
On January 18, 2020, Julie succumbed after a long valiant battle with Myeloma. She will be long remembered for her intelligence courage and determination. She will be missed so much by all of those people that had the honor of knowing and loving her.
A Family Celebration of Life will be held at a later date.
Memorial contributions can be made to St. Thomas Episcopal Church 400 N. Center Street, Plymouth, IN 46563.