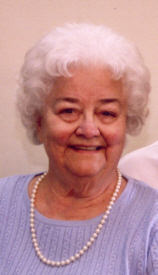 June C. Thake, 85, of Eastwood Estate’s Cedar Ct., Plymouth, died peacefully at her home at 9:55 a.m. on Thursday, December 30, 2010.
Born in Janesville, Wis., on July 21, 1925, June was the daughter of Herbert G. and Clara E. (Edwards) Sarney.
She graduated from Steinmetz High School, Chicago, in 1943. June earned her R.N. from Grant Hospital School of Nursing in Chicago in 1945.
On April 19, 1947, in Chicago, Ill., June and Arthur E. Thake were married.
She liked to travel and enjoyed cooking and reading. She was always interested in the activities of her children and grandchildren.
She was a member of St. Paul’s Lutheran Church of Bremen.
June was preceded in death by her parents, a brother Herbert G. Sarney and is survived by her husband Art of nearly 63 years and their three sons and two daughters. They are sons David A. Thake, Belvidere, Ill.: Dale R. (Colleen) Thake, Charleston, SC.: Dan F. (Beth)Thake, Wauconda, Ill.
Daughters include Diane J. (John) Schumacher, St. Charles, Ill. and Donna D. (Mike) Gordon, Plymouth, Ind. Fifteen grandchildren and ten great-grandchildren, survive as well.
Friends are invited to share memories with June’s family on Sunday, January 2, 2011, from Noon to 2 p.m., at the Johnson-Danielson Funeral Home, 1100 N. Michigan St., Plymouth, Ind.
Funeral services for June will be held at 2 p.m. Sunday following visitation in the funeral home. Pastor Roger Rohde will officiate.
Burial will be in the Plymouth New Oakhill Cemetery.
Memorial gifts may be made in June’s name to St. Paul’s Lutheran Church, 605 S. Center St., Bremen, Indiana 46506 or Memorial Hospital, 615 N. Michigan St., South Bend, Indiana 46601.
Funeral Director – Randall L. Danielson – randy@johnson-danielson.com