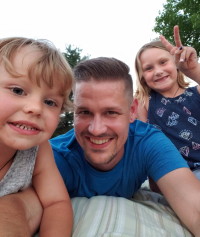 Justin P. Thoden, 35, went to be with his Lord and Savior on June 2, 2020. He was a loving, son, husband, father, brother and friend.
Born August 3, 1984, Justin was one of four children born to Richard M. and Sandra J. (Vincent) Thoden. He graduated from Plymouth High School with the class of 2002. It was in high school that his love and passion for music grew. He was a member of the band and played the baritone saxophone. Justin also played in his band “Weez the Juice”. After high school, he went on to graduate from Minnesota Technical College in 2003, with his degree as a musical instrument repair technician.
Justin met the love of his life, Ashlie L. Lehr, in 2003 while both working at the Pizza Hut in Plymouth. He would go away to college, but the two would find each other again in 2010 and remain one. He was the hard head to her soft spirit, the perfect balance. They would welcome two children, Addelyn and Graham. Justin was an amazing father. He was very hands-on in teaching them things and was involved in their activities and sports.
Justin worked for JR Music in Plymouth before joining Quinlan & Fabish Music Co. in Mishawaka, where he repaired numerous instruments. He would even get to bring some of them home to work on, and the kids got the chance to practice various instruments.
He was and will always be remembered by many for his smile and kind heart. Justin always made the best out of everything and would do anything for anyone. He took pride in his yard and home. He loved to work with his hands and was eager to learn new skills and trades. Justin loved tinkering with cars and was becoming a jack-of-all trades. He enjoyed playing softball, bowling, canoeing and floating the river. He was a really good cook, and enjoyed sharing beers with his family and friends.
Justin grew up in the First United Methodist Church in Plymouth, and was confirmed there. He knew God and his love. He was part of the Adam’s Street Ministry growing up, which helped form his connection with the Lord. Justin tried his best to keep in contact with fellow members of that ministry. Justin and his family are now members of the Plymouth Wesleyan Church.
While Ashlie worked nights as a nurse, Justin adored the precious time he got with his kids. The family shared prayers before every meal. Ashlie and he took turns putting the kids to bed, reading them books and saying their goodnight prayers. They made sure their children knew about Jesus’ love.
Justin is survived by his wife, Ashlie of Plymouth, and their children, Addelyn and Graham; his parents, Sandy and Richard of Plymouth; siblings: Bethany Bolinger of Plymouth and her daughter, Avery, Kyle (Adriann) Thoden of Indianapolis and Chelsea (Cody) Caudill of Rochester; mother and father-in-law, Jeff and Sue Lehr of Plymouth; sisters-in-law, Andie Lehr and Amy (Michael) Williams and their children: Hayley, Cameron, Ian, Ellie and Aidan; maternal grandmother, Connie Blue; paternal grandparents, Richard (Jeannette) Thoden Jr.; uncles and aunts: Joe, Phil (Holly), Paula (Chip), Chris (Mark) and Bill; and many cousins and dear friends.
He was preceded in death by his maternal grandfather, Ronnie Vincent.
Visitation will he held on Wednesday, June 10, 2020 from 3-7 p.m. in the Plymouth Wesleyan Church, 11203 Michigan Road, Plymouth.
Funeral services will be held on Thursday, June 11, 2020 at 11 a.m. at Plymouth Wesleyan Church. With Pastor Taylor Hulse officiating. Visitation will resume one-hour prior.
Burial will be in the New Oak Hill Cemetery, Plymouth.
In lieu of flowers, memorial contributions can be made to Ashlie or through First Federal Bank in Plymouth, for his children and their futures.