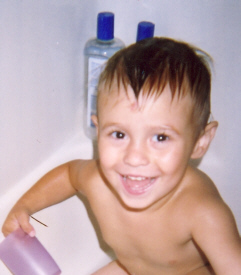 Little “Punky” Humes ran into the arms of the Lord at 9:20 p.m. on Saturday, December 17, 2005.
Kaine Nathaniel Humes, 17 West Davis St., Hamlet, the beloved son of Edward Earl, Jr., and Melissa Leah Guerra Humes died in Memorial Hospital, South Bend, from injuries sustained in a one vehicle accident on December 15th.
He was four & ½ years – old. His smile could light up a room. He was the only one who could make his baby sister laugh.
Despite the pain, Punky’s family have beautiful memories of the light brown golden haired boy with the beautiful brown eyes. He will be missed and remembered forever.
Punky was born in the hospital where he died on July 19, 2001. He was a student at the Starke County Head Start Pre-school and enjoyed every minute.
He loved to give hugs to everyone and he delighted in making people laugh.
His favorite toy was his 4-wheeler he called his ‘Nen Nen.’ He had a hearty appetite for life and for food and enjoyed going to Chucky Cheese’s and eating Chinese out with his special Aunt D.
He was an active, energetic child, loving to be outdoors—fishing, skate boarding and sledding and riding his 4-wheeler. He was a Spiderman and Ninja Turtle fan and had a great imagination.
Punky was a member of the Children’s Bible Study group of the House of the Lord, Plymouth.
He is survived by his heartbroken parents, Melissa and Ed and by his five-month-old sister, Kendra Sue Humes, all of Hamlet, Ind.
Martha and Jack Guerra, Punky’s maternal grandparents, Plymouth and Ed. E. Humes, Sr., his paternal grandfather, also of Plymouth, survive, together with his paternal grandmother, Nancy (Roger) Hudson of Claypool, Ind.
Daniel and Edna Guerra, maternal great-grandparents of South Bend, several aunts, uncles and cousins survive as well.
Cousins Gabby, Anna and best friend, Tyler, also will deeply miss their Punky.
The love and comfort of friends will be welcomed by the family on Wednesday, December 21, 2005, from 6 to 8 p.m. in the Johnson-Danielson Funeral Home, 1100 N. Michigan St., Plymouth, Ind.
Funeral services for Punky will be at 10:30 a.m. on Thursday, December 22, 2005, in the funeral home. The Rev. Steven Patrick, pastor of the House of the Lord, will officiate.
Burial will be in New Oakhill Cemetery, Plymouth.
Memorial gifts to the family, made in Punky’s name, will be appreciated.