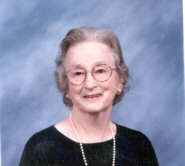 Kathleen K. Reeder, 86, died in her home, 801 S. Michigan St., Plymouth, at 5:15 a.m. on Tuesday morning, March 2, 2004.
She was born on July 18, 1917, in Huntsville, Ala., the daughter of Edgar D. Sr., and Annie Woodward Kinnibrugh. On March 28, 1936, in Luka, Miss., Kathleen and John B. Reeder, Sr., were married. John preceded her in death on May 19, 2001.
A homemaker, she was an excellent contract and duplicate bridge player and a charter member of the Plymouth Duplicate Bridge Club.
She was a loyal member of the First United Methodist Church, Plymouth.
Kathleen is survived by a daughter, Ann R. Powell, Indianapolis, Ind., and a son, John B. Reeder, Jr., Bryan, Texas.
Three grandchildren and five great-grandchildren, together with a sister, Billye K. Gayle, Birmingham, Ala., survive as well.
She was preceded in death by her parents, her husband and a brother, Edgar D. Kinnibrugh, Jr.
There will be no visitation.
Graveside services will be held at 11 a.m. on Saturday, March 13, 2004, in the Maple Hill Cemetery, Huntsville, Ala. The Rev. Byron White will officiate.
Interment will take place in the Maple Hill Cemetery, Huntsville, Ala.
The Johnson-Danielson Funeral Home, 1100 N. Michigan St., Plymouth, is in charge of arrangements.
Memorial gifts in Kathleen’s memory may be made to the Marshall County Cancer Association.