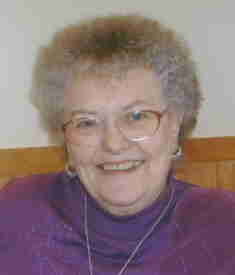 Kathryn (Katie) Anders, 87, went to be with her Precious Lord at 11:35 p.m. on Thursday, September 19, 2013, following a brief illness.
Katie was born on September 30, 1925 in Nappanee, IN to Walter and Bessie Smith White,
On October 20, 1944, she married LeeRoy Anders in Plymouth. LeeRoy preceded her in death on December 24, 1995.
Katie retired from J C Penney’s in 1991 and the Bible Book Store in 2002.
Katie graduated in 1943 from Lincoln High School, Plymouth, IN. She played in the band and also played the electric Hawaiian steel guitar and the accordion.
Katie had many hobbies including sewing, crocheting and most of all, her music. Katie has made many afghans for family and friends. She has also made many purses and quilts. Katie also made “Memory Bears” for Johnson-Danielson Funeral Home. She called it her mission to help people remember their loved one. All of her bears were made with a lot of TLC, to make each one special.
Katie is the only remaining charter member of the First Baptist Church in Plymouth, IN, since May of 1958. She has been a Sunday school teacher for many years and played the organ when needed.
Katie was a member of the Friendship Quilters Club.
She is survived by a daughter, Linda (Ken) Wilhelm of Camden, TN and a daughter-in-law, Robin Anders of Akron, OH.
Also surviving are seven grandchildren: Duane (Cathy) Wilhelm, David (Amber) Wilhelm, Devon Wilhelm, Amy (Mick) Wallis/Pourner, Bryan Anders, Garrett Anders and Cody Anders, along with 12 great grandchildren James Wilhelm, Nicole (Kyle) Murphy, Josh Wilhelm, Zackari Wilhelm, Dayna Wilhelm, Dylan Wilhelm, Cameron Wilhelm, Lilly Wilhelm, Hannah Wilhelm, Zavier Pourner, Leah Pourner and Zoey Pourner; a great-great granddaughter, Hazel Murphy.
Katie also has several nieces and nephews, with a special niece, Barbara Kirby, who has been like a daughter.
Proceeding her in death were her parents; her husband: LeeRoy; a daughter, Diana Kay; two sons: Charles Lee Anders and David Roy Anders; five brothers: Edward, Charles, Raymond, Wilbur, and Emmett White; a sister, Clara Hansen and a great granddaughter, CaiLynn Wilhelm.
Visitation will be from 4-8 p.m. on Tuesday, September 24, 2013 in the Johnson-Danielson Funeral Home, 1100 N. Michigan Street, Plymouth, IN, and at the Church on Wednesday from 10-11 a.m. Funeral services, officiated by Pastor Lonnie Nicholl, will be at 11 a.m. on Wednesday, September 25, 2013 at the First Baptist Church, SR 17, Plymouth, IN (Beside Saint Joseph Regional Medical Center). Burial will be in New Oakhill Cemetery, Plymouth, IN
Memorial gift in Katie’s memory may be given to the First Baptist Church, The Center for Hospice Care, 112 S. Center Street, Plymouth, IN or The American Heart Association, 208 S. LaSalle, Suite 900, Chicago, IL. 60604