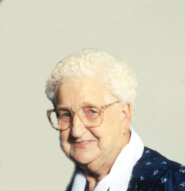 Kathryn Elizabeth Kreighbaum, 79, died of natural causes at 7:30 p.m. in Miller’s Merry Manor, 600 Oakhill Ave., Plymouth, on Friday, February 4, 2005.
A lifetime Marshall County resident, Kathryn was born on February 28, 1925, the daughter of Charles LeRoy and Florence Amelia Kaufman Rains.
On March 17, 1946, in Plymouth, Kathryn and Jacob Ray Kreighbaum were married. Ray died on October 1, 1990.
A graduate of West High School, Class of 1944, Kathryn was involved on the family farm and later in life, proudly served as a nursing Geriatric aide at Miller’s Merry Manor for 15 years, retiring in 1985.
She was very attentive to her family and also loved her cats and dogs. She enjoyed sewing, collecting dolls, cooking and baking. Her homemade noodles were a particular favorite of her family.
A sports enthusiast, she especially followed her family’s activities.
Kathryn, a member of the Sunrise Chapel, since 1990, baby sat in the nursery and had assisted with 4-H projects.
She is survived by two daughters, two sons and their spouses.
Her daughters are: Sandra K. and Roy Sickman, Plymouth, and Norma J. and Paul Harness, Argos, Indiana. Her sons are Larry D. and Virginia Seitz Kreighbaum, LaPorte, Indiana, and Carl E. and Martha Kreighbaum, Spring Hill, Tennessee. Three granddaughters, seven grandsons and three great- grandchildren also survive.
Two sisters, Rose Aline MacLain, Plymouth, and Betty Darlene and Bryan Green, Rochester, and a brother, Charles LeRoy Rains, Silver Creek, Mississippi, survive together with numerous nieces and nephews.
Kathryn was preceded in death by her parents, her husband, Ray and by four brothers: Loren, Donald, Robert and Dave Rains. One granddaughter, Paula Jean Harness has also died.
Friends will be welcomed by her family on Monday, February 7, 2005, from 3 to 8 p.m. in the Johnson-Danielson Funeral Home, 1100 N. Michigan St., Plymouth.
Funeral services will be held in the funeral home on Tuesday, February 8, 2005, at 10:30 a.m. The Rev. Rustin Krapft, pastor of the Sunrise Chapel will officiate.
Burial will be in New Oakhill Cemetery.
Memorial gifts in Kathryn’s memory may be made to the Sunrise Chapel’s Children’s Program.