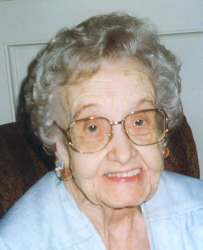 Kathryn S. Doerr, 97, a resident for the past year at Miller’s Assisted Living Facility in Plymouth, died of natural causes at 10:35 a.m. on Thursday, November 17, 2005, in Saint Joseph’s Regional Medical Center, Plymouth.
Born in Camden, N.J., on April 4, 1908, Kathryn was the daughter of Burt and Emma F. Kummer Reed. She graduated from Camden High School and the Camden Commercial College.
One of her fondest memories as a teenager was attending the first Miss America Pageant in Atlantic City, N.J. in 1921. In an interview several years ago she said that “Atlantic City was our family’s second home.” Kathryn met her husband, Clarence Doerr, in 1937, on a train trip when both were traveling to California.
They were married on April 12, 1939, in Camden, N.J. He was the superintendent of the Plymouth District of the Northern Indiana Public Service Company and together they enjoyed the continued company and friendship of the Gremlins. Kathryn came to Plymouth as a bride and has remained here ever since. She and Clarence were married for 55 years before his death on May 2, 1994.
She said that people had thought she would move west to be near her daughters after “Doerr” died.
“But I loved Plymouth and I was happy here and made it my home.” She was a proud and happy homemaker for over 55 years in the residence they built on Ferndale Avenue.
A homemaker, Kathryn was a member of Eastern Star for more than 78 years. In 2002, she was honored at a ceremony at the Plymouth Masonic Lodge where she received a citation and a pin from the past grand patron of Eastern Star. Kathryn had also been the past matron of her chapter in her hometown of Camden, N.J.
She was an active member of Delta Theta Tau for over 25 years and an associate member for many more.
A dedicated bridge player, she belonged to two bridge clubs and was a founder of the popular Plymouth Community Bridge Club. She was a member of the Women of the Moose and a charter member of the Parkview Hospital Auxiliary and a former member of the Plymouth Country Club.
Kathryn loved playing almost any card game. Bridge was her favorite but she was also an excellent euchre and canasta player too. She crocheted, baked and sewed and for years knitted baby booties for the hospital’s gift shop.
She is survived by two daughters: Joanne K. Maher, Temple City, California, and Evelyn R. and Donald Heim, West Hills, California.
Five granddaughters also survive. Joanne’s daughters are Tamara Maher-Salgado who with her husband, Peter, lives in San Clemente, California, and Christine Maher-Pallister and her husband, Garry, of Alemeda, California. Evelyn’s daughters are Deborah Heim-Waddill and husband Nathan of Plymouth: Kathlyn and Glenn O’Shea of Castiac, California and Karen and Bryon Zambello of Mason, Ohio.
Five great-grandchildren survive as well. They are Lauren and Cameron Zambello and Sean and Kayla O’Shea and Hailey Pallister.
Kathryn was preceded in death by her parents, her husband and two sisters: Helen Weidman and Evelyn M. Reed.
Friends will be welcomed by Kathryn’s family on Sunday afternoon, November 20th 2005, from 1 to 3 p.m. at the Johnson-Danielson Funeral Home, 1100 N. Michigan St., Plymouth Services will begin at 3 p.m. Sunday in the funeral home with an Eastern Star memorial rite and followed by funeral services conducted by the Rev. Dr. Ronald Liechty and the Rev. Paul Nye, of the 1st Presbyterian Church, Plymouth, where Kathryn was a long time member.
Entombment will be in the New Oakhill Mausoleum, Plymouth.
Memorial gifts in Kathryn’s memory may be made to the 1st Presbyterian Church, P.O. Box 433, Plymouth, IN 46563 or the Saint Joseph Regional Medical Center Auxiliary, 1915 Lake Avenue, Plymouth, IN 46563.