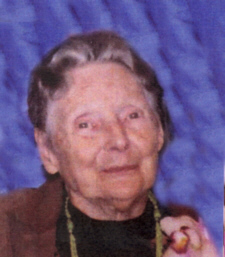 Kathryn V. Weccard Chandler, 91, one of Donaldson’s oldest residents, died of natural causes at 5:38 a.m., on her farm in Donaldson on Tuesday morning, August 28, 2007.
She was born in a strong German enclave in Chicago, on May 14, 1916, the only child of John W. and Marie O. Mey Weccard.
She first came to Donaldson when she was only one year old. She was sent to her grandparents,’ Victor and Clara Mey’s, farm, to live for an entire year to escape the Spanish Flu pandemic of 1918-1919.
Ever after, she came every summer of her life to visit. She helped the hired hands with the chores and played hostess to the extended families who vacationed there. She learned horseback riding and became an accomplished equestrian in Chicago and Marshall County. She learned to drive a horse and buggy and when she was 12, she was the only family member who learned how to drive their 1928 Packard. A crack shot, she learned to shoot everything from a Derringer to a rifle.
Kathryn graduated from Chicago’s Mercy High School in 1934, the same year her family built the former Divine Heart College and Seminary on part of their family farm.
She became a private eye and went to work in her father’s business, the American Detective Services with offices in Chicago and New York City. She was assigned to undercover work, riding the trains between the two cities.
After her father’s death in 1944, Kathryn went to work for the Franciscan Relief Service, providing help to refugees of World War II.
She later worked as assistant to the president of the General Tire and Rubber Co. in Chicago, before her marriage on Nov. 27, 1948, in Saint Philip Neri Church to Joseph L. Chandler, a decorated Army veteran who had served his country in the Pacific Theater. Kathryn retired after her marriage to raise a family. Three children were born –all of whom spent their summers on the Donaldson farm, Kathryn and Joseph having restored the homestead to its original beauty. They retired on the property in 1979.
After Joseph’s death on January 18, 1983, she traveled extensively to visit family in Europe and throughout the United States.
Driving a car was a life long passion as she would frequently drive from Chicago to the farm say hello to longtime caretakers and friends; Joe and Marcella Heet and return to Chicago. She gave up the practice at the age of 87. The Heet’s, along with Barbara Blaczyk and Lisa Strykel, continued as her steadfast caregivers in recent years.
Whenever the weather permitted, she could be seen in her wheelchair along Union Road, inspecting the fields, checking on the orchard and gathering wildflowers.
Very social, she enjoyed parties and the activities of her dear grandchildren. She was always welcoming family and friends for visits. Kathryn was a member of Saint Alexander Church, several women’s groups and president of the Women’s Wanacas.
She is survived by two sons, a daughter and families: John Chandler of Donaldson: Robert and Mary Lou Chandler of Villa Park, IL and children: William R. (Jeanne) Chandler, Timothy R. Chandler, Michelle M. Chandler and Cathleen M. Chandler. Daughter, Mary Ann and Colin Jack of Valparaiso, IN and children: Clifford N. Jack, Christine L. Jack and Laura M. Jack.
Kathryn was preceded in death by her parents and her husband.
Friends are invited to celebrate the life of Kathryn Chandler on Wednesday, August 29, 2007, from 4 to 8 p.m. EDT in the Catherine Kasper Chapel, Donaldson, Ind.
Visitation will continue from 3 to 9 p.m. CDT on Thursday, August 30, 2007, in the Steuerle Funeral Home, 350 S. Ardmore Ave., Villa Park, Ill. At 10:00 a.m. CDT on Friday, August 31, 2007, a Mass of Christian Burial, officiated by Fr. Donald Rowe, S.J., Fr. Brian Paulson, S.J. and Pastor, Fr. Tuan, will be held at Saint Alexander Church, 300 S. Cornell in Villa Park, Ill.
Burial will follow in Rosehill Cemetery, Chicago.
The Family requests memorial gifts in Kathryn’s memory be made to the Ancilla Domini Endowment Fund, St. Alexander Church or the St. Ignatius College Prep – Financial Aid Endowment Fund.