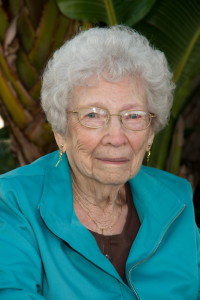 Kathryn V. White, 105, left her earthly body on Friday July 31, 2020 at Pilgrim Manor Nursing Home, Plymouth. Born on May 27, 1915 in Plymouth, Indiana, Kate was the first of seven children of Harry and Grace Stockman (Muzzie) Wright.
Kate married William C. White on March 20, 1937 at the First Presbyterian Church of Plymouth where they were lifetime members and they were happily married for 62 years. She worked for J.C. Penney’s before leaving to become a bank teller at the Marshall County Bank, which is now the First Source Bank. When Kate retired, she and Bill fulfilled their lifelong dream of traveling to California and Hawaii. Kate has impacted the lives of her grandchildren and great-grandchildren. During her retirement years she involved herself in church activities, learning how to use the computer and attending local activities involving her great-grandchildren. As a strong prayer warrior, she was a role model to her family and all who knew her. She is survived by her two children: Maridee (Dale) Hayes of Hamlet, IN and David White of Fort Wayne, IN; three sisters: Mary Phillips and Peg (James) Clevenger of Plymouth, IN; Jean Carlise of Atlanta, GA; five grandchildren: Kathy (Robin) Roberts of Plymouth, IN; Kurt (Dawn) Hayes of Hamlet, IN; Kara (Chad) Kruse of Fishers, IN; Julie (Ryan) Briggs of Columbia City, IN; Ryan (Thursday) Harding of Colorado Springs, CO; fourteen great-grandchildren: Mark (Sarah) Roberts of Plymouth, IN; Lynda (Trent) Nicholson of Eureka, IL; Stacy (Damon) Johnston of Grovertown, IN and Sam Hayes of Hamlet, IN; Dillon and Logan Kruse of Fishers, IN; Tristan, Landan and Bailee Yount, Peyton Buckley, and Hadley Briggs of Columbia City, IN; Cole, MaKenzee and Gavin Harding of Aurora, CO; great-great grandson, Drew Roberts with two more great-great grandchildren on the way and former daughter-in-law Berniece White, Columbia City, IN.
Kate is preceded in death by her husband, William; her brother, John Wright; her daughter-in-law, Linda Miller White; her sisters, Bette Lee and Julia Hatfield; and her grandson Doug Harding. A private family service will be held on Friday August 7, 2020 Burial will be in the New Oak Hill Cemetery, Plymouth.
Memorial donations can be made to the Center for Hospice, 112 S Center St C, Plymouth, IN 46563.