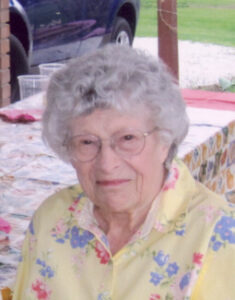 Kathryn Willadean (Mrs. Herbert) Blocker, 88, a lifetime Marshall County resident of 14393 St. Rd 10, Argos, passed away Tuesday evening, June 26, 2012 at 9:42 p.m. in the Memorial Hospital of South Bend unexpectedly following a brief illness. Since 1951, Kathryn had lived on the same family homestead where she was born to Raymond Ellsworth and Mildred Emaline (Dinsmore Price) Overmyer on April 2, 1924. She attended Green Township School for eight years and graduated from Argos High School with the Class of 1942. In 2009, Kathryn was honored with a Distinguished Alumni Award from her alma mater.
Kathryn worked as a teller for the State Exchange Bank in Argos and Culver for nearly 12 years, which she truly loved. It was here that her future husband, Herbert Leroy Blocker, came in one day to cash his paycheck. Herbert and Kathryn were united in marriage on September 25th, 1949 at the Poplar Grove United Methodist Church. Herbie and Kathryn raised chickens for over 15 years, supplying a Chicago wholesaler with eggs. Always working together, they raised beef cattle, hogs, and various crops on the family farm. Kathryn’s many interests included providing for her six children, sewing, and canning vegetables—not only for their needs, but for friends and neighbors far and wide. Kathryn and Herbert enjoyed countless spur-of-the-moment car trips all around the Midwest and West—at first with all 6 children, and later on their own. She enjoyed working outdoors tending to her yard and large garden. Kathryn was always happy to spend a day out on her riding lawnmower, even up until her recent illness.
In her early years she was involved in Indiana Rural Youth and won the title of Marshall County Dress Review Champion with the 4-H twice. Kathryn continued her sewing and quilting for over 60 years as a charter member of The Home and Hobby Extension Club of Marshall County. Both during and after raising her family, Kathryn found time to serve on the Argos Public Library Board. She also volunteered diligently at the St. Joseph Hospital in Plymouth as a Spiritual Care Counselor for more than 10 years.
Every Saturday evening, Kathryn could be found at her piano or organ bench practicing for Sunday morning services at Poplar Grove Church. In addition to being an active member here for over 50 years, she was also the church pianist and organist. Kathryn served on countless committees and projects through the years, including the annual Poplar Grove Church Ice Cream Social for which she always provided her special homemade ice cream toppings. She and Herbie deeply loved the Red Bird Mission in southeastern Kentucky and contributed hours and monies whenever they could. They enjoyed their frequent trips there to see the mission organization firsthand.
In 1993, Kathryn’s talents surprisingly evolved into her stage persona of “Aunt Flabby”. She performed this comedy routine for many years at area churches, extension clubs, civic ladies’ organizations, and even on stage at a church convention in Indianapolis. Kathryn always loved making people laugh—“Aunt Flabby” became a perfect avenue for her talent. She made a point to really ‘know her audience’ and always included several personalized jokes for those lucky enough to see her perform. Her family of six children includes: Daughter Carol A. and Charles Lewallen of Plymouth with their children; Brian A. (Jennifer) Lewallen and children; Colton and Taylin, David L. (Brittley) Lewallen and children; Abigail and Calvin, and Michael S. Lewallen. Daughter Dianne K. and Robert Osborn of Culver with her children; Kristy L. Robinson and Kurt A. Robinson (fiancé Patty Pusateri). Sons Alan K. Blocker of Argos and Brent E. and Lisa Blocker also of Argos. Son Estel L. and Karen Blocker of Culver and their children; Kathryn, Daniel and Anna. Daughter Fonda S. and Federico Suarez of Osceola and their son; Elliott.
She was preceded in death by her only sibling, Darold Wayne Overmyer, on November 28, 1991 and her husband, Herbert, on December 1, 1995. Visitation will be held in the Johnson-Danielson Funeral Home, 1100 N. Michigan St. Plymouth on Friday, June 29th from 4 – 7 p.m.
Services will be held in the Poplar Grove United Methodist Church on St. Rd 10 West (between Argos and Culver) at 11 a.m. on Saturday, June 30th with visitation 1 hour prior. Pastor Henry Sprunger and Rev. Les Johnson a Chaplain at St. Joseph Regional Medical Center will officiate.
Burial will immediately follow in the Maxinkuckee I.O.O.F. Cemetery at Poplar Grove.
Memorial gifts may be made to the Poplar Grove United Methodist Church.