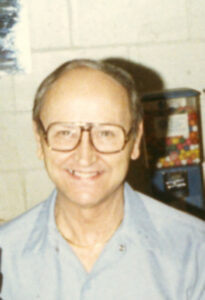 Keith D. Ash, 81, a former Plymouth resident, living with his daughter at 19160 W. 14th Rd., Culver, and then a resident of Miller’s Merry Manor, Culver, for the past 2 ½ years, died of natural causes at 12:22 a.m., Sunday, January 20, 2008, in Saint Joseph Regional Medical Center, Plymouth.
Keith was born in Winamac, Indiana, on July 15, 1926, the son of Earnest George and Grace Lelia Olds Ash.
He served his country in the United States Navy.
On December 30, 1961, in Winamac, Keith and Harriett Jean Poor were married. Harriett died on October 17, 1983.
Keith was at one time engaged in farming raising chickens and worked at Young Door in production. He retired in 1998.
He enjoyed gardening and was an avid sports fan of all kinds, especially Indiana and the Chicago Cubs. He liked to bowl and was in a Plymouth bowling league. A Western movie fan, he enjoyed watching T.V. movies.
He formerly attended the Plymouth Church of the Brethren.
Keith is survived by three daughters: Sandra L. (Matt) Lough, Culver: Toni Shinabarger, Goshen and Barbara Ash, Okoechobee, Florida. A son, Dion K. Ash, Indianapolis, survives as well.
Two grandchildren also survive together with a sister, Alma Jean (Bill) Davis of N. Judson.
Keith was preceded in death by his parents, his spouse and four brothers: Arthur, Argyl, Vernal and Veryl. Three sisters have also preceded him: Florence, Helen and Mary.
Friends are invited to celebrate Keith’s life on Tuesday, January 22, 2008, from 5 to 7 p.m. in the Johnson-Danielson Funeral Home, 1100 N. Michigan St., Plymouth, and after 7 a.m. on Wednesday, January 23, 2008.
Funeral services for Keith will be held at 11 a.m. on Wednesday, January 23, 2008, in the funeral home. The Rev. Ruth Yoder, pastor of the Plymouth Church of the Brethren, will officiate.
Burial will be in New Oakhill cemetery, Plymouth, with full military graveside ceremonies provided by the Plymouth American Legion, Post 27. Memorial gifts in Keith’s memory may be made to the Plymouth Church of the Brethren.